It’s almost the one-year anniversary of the release of Mikey Shorts ($1.99), the platformer from BeaverTap Games that made such a splash in the world of iOS gaming. It garnered praise for absolutely nailing the controls, and it was stuffed with tons of humorous unlockable costumes which added a very welcome aspect of customization as you played.

Most importantly though Mikey Shorts excelled in level design, and was able to provide a satisfying experience for those just looking to bounce around in a fun platformer as well as those who would memorize every little detail of a level and retry obsessively in an effort to shave fractions of a second off of completion times. I was in that latter group and I think that’s the best way to describe Mikey Shorts: an obsession.

If you shared a similar experience as I did well get ready to fall off the wagon as Mikey Hooks ($1.99) has finally arrived, and it’s pretty much guaranteed to be your next obsession. Everything good about the original game makes a return here, from the UI and menus, to the disguise shop, to the 3-star scoring system and more–everything feels familiar if you’ve played Mikey Shorts or the Halloween spinoff Mikey Shorts Halloween (Free). There’s just one very big difference: the hooking. 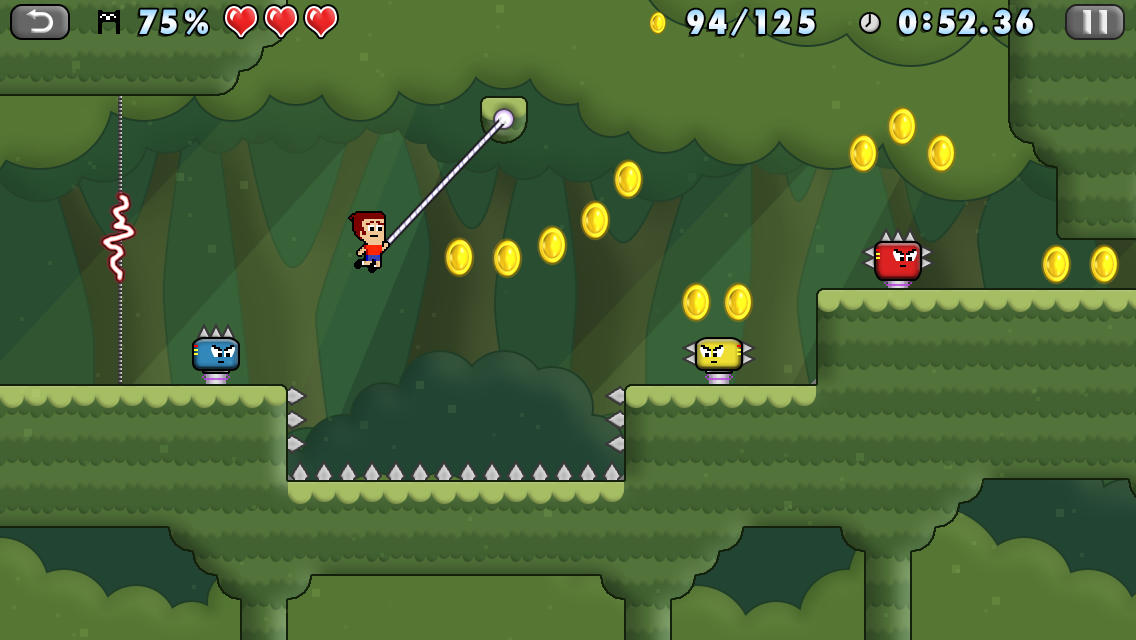 Levels contain many different anchor points in which you can launch a grappling hook to and swing from. It’s a pretty big addition to the core mechanics of the series, but it’s easy as pie to warm up to. Simply holding down the jump button while you’re in the air and an anchor point is highlighted will cause you to latch on and swing forward until you let off the button. It feels so natural to the normal flow of the game that it feels weird to go back and play Mikey Shorts without the swinging mechanic, it fits that well.

The hooking was inspired by Rocketcat’s excellent hooking games: Hook Champ (Free), Super QuickHook (Free) and Hook Worlds (Free), but it feels much different in Mikey Hooks. In Rocketcat’s games you could touch anywhere to latch on and swing, but in Mikey Hooks you can only grapple on the specific anchor points laid out in the level. This gives Mikey Hooks a more mechanical feel than something like Hook Champ. Not a bad thing, just different if you’ve played a lot of Rocketcat’s hooking games. 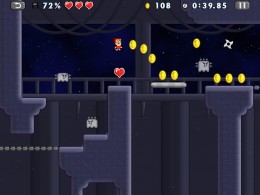 Besides the big new hooking mechanic, Mikey can also take damage from enemies and the environment now. Enemies come in three varieties. Blue enemies have spikes on their head, so you can’t stand on them but you can slide into them to destroy them. Yellow enemies are the opposite–spikes on the sides so you can’t slide into them but you can (and will have to) use the tops of them as platforms. Then there’s red enemies which are the worst of both worlds. They have spikes on the sides and on the top, so basically just have to be avoided at all costs.

There are also spikes, buzzsaws, bolts of electricity and other environmental hazards to watch out for. Hitting one will take away one heart from your life, which by default you have three of, and losing all hearts will fail the level, requiring a restart. More damaging though, especially for speedrun enthusiasts, is that hitting an enemy or environmental hazard will knock you back and tick precious seconds off of your time.

The game features a Story mode with 24 levels spread across 6 different worlds, just like the original Mikey Shorts. If you’re a veteran Mikey player then the Story mode won’t take you too long to blow through if you’re just shooting for basic 1 and 2 star completion. Maybe an hour or two. But as you already know, the fun is going back to nab every coin, discover each level’s hidden Golden Shorts, and earn that 3rd star by finding a quicker path through the levels. Of course each of the Story mode’s levels have an associated Game Center leaderboard, so you could spend hours, days and weeks replaying levels trying to improve your times and compete online. 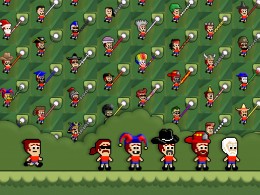 In addition to a Story mode, the original Mikey Shorts had what were called Challenge levels. These were shorter levels focused entirely on speed, and the faster you completed each the more points you’d earn, with a Game Center leaderboard for total Challenge points to compete on.

In Mikey Hooks, Challenge mode is replaced with Race mode, which I feel is much better. Race mode pits you against 3 AI ghosts as you race through 12 different levels, again with quickest times earning the most points and a leaderboard tracking your total for all levels. Only 12 levels, you say? Yes, but these Race levels are LONG. Many even feel longer than the levels in Story mode, and they retain the same multiple paths that the original game’s Challenge levels had, which added a lot of room for experimentation as you found the ideal line through a level. In short, I like Race mode even more than Challenge mode, and it appears this is where new levels will be added via future updates, which I’m already excited about.

Another new addition to Mikey Hooks that’s a change for the series is in-app purchases. Wait! Don’t freak out, it’s only one in-app purchase and it’s entirely optional, though if you’re a fan of the Mikey series you’re probably going to want to plop the 99¢ down for it. It unlocks a Bonus menu where you can toggle an option for double coins, one for a coin magnet, double your number of life hearts, and finally–my personal favorite–enable a retro mode which dumbs down the graphics old-school style. It’s all quite unnecessary as you’ll earn plenty of coins just playing the game normally, but was easily worth the price for me just for the awesome retro mode.

Mikey Hooks does exactly what you’d hope from a sequel: keeps everything about the original that worked while at the same time adds some new mechanics and ideas to offer a new experience. It fires on all cylinders, and if you’re a fan of the previous games you don’t even need this review to determine if you should get it or not–you probably have already bought it. For everyone else, if you missed out on Mikey previously then see what folks are saying in our forums about this new entry and give the lite version of the original a try to see if it’s up your alley, and if it is, then Mikey Hooks is an effortless recommendation.