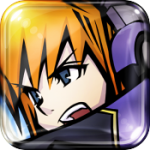 When Square Enix released The World Ends With You on the Nintendo DS several years back, it was notable for its more contemporary setting of life as a teenager in modern-day Japan, as opposed to the RPG trope of a ragtag group of kids embarking on a journey to save the world from evil in some fantasy setting. It was also notable for its intriguing dual-screen combat system, thanks to the two screens of the Nintendo DS.

Just about a year ago, the popular RPG made a surprising appearance on the App Store as The World Ends With You: Solo Remix ($17.99). It lost its dual-screen battling mechanic, but that turned out to be no great loss as it still retained its strong themes, excellent story and interesting characters. In short, The World Ends With You: Solo Remix found a new home and entirely new audience on iOS, and it was fantastic.

Square Enix is known for pricing their games higher than most and for not having many sales, but right now TWEWY: Solo Remix is nearly half off for both the iPhone and iPad versions.

If you haven’t already picked up TWEWY previously and you’re wondering if you should jump on this sale, check out our full 5 star review of the game as well as our TA Plays video to get an idea of if this one is for you. For what it’s worth, I’m not a huge RPG guy and didn’t really think I’d identify with the themes in TWEWY, but once I started playing it I found it simply incredible. This is an outstanding experience, and there’s likely more on the way, so give The World End With You: Solo Remix a look while on sale.