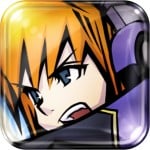 Today Brad and I get busy on a high-profile port of Square Enix’s critically acclaimed RPG The World Ends With You. It first hit the US on the Nintendo DS in 2008, and was praised for its unique art style, accurate portrayal of Japanese youth culture, and an interesting dual-screen battle system that had you controlling two characters simultaneously, one using the touch screen and one using the d-pad and buttons.

It’s this dual-combat system that received the most radical reworking bringing the game to iOS, hence the new title The World Ends With You: Solo Remix ($17.99). That second character you’d normally be controlling on the top screen of your DS has been worked into the main character’s repertoire of offensive moves, and it seems to work out just fine in my short time with the game.

The rest of the game should seem mostly how you remember it if you played the DS original. The comic book-like presentation and art style is fantastic, and the story and characters are all sharp enough that I’ve been having no trouble being engaged in what’s happening and wanting to push on. If you can look past some of our off-topic discussion about Brad cutting his hair and possibly waxing his chest, you should get a good look at what the entire first chapter of The World Ends With You: Solo Remix is like on iOS in the video below.