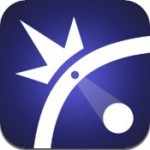 After his impressively successful first foray into game development with Polymer ($2.99), Whitaker Trebella is back at it with his newest release Pivvot. The actual iTunes text does a great job at succinctly describing Pivvot, calling it “a thrilling game of strategic avoidance that will consistently test and challenge your ability to make quick, impulsive decisions." That totally nails it.

The way Pivvot works is you travel along a winding, maze-like track not totally unlike the twisty levels in Groove Coaster ($2.99). Your actual character, if you can call it that, is a simple circle attached like a ball and chain to a center point that travels along the winding track. The radius from that center point to your circle is like a “safe zone", able to travel right through the stuff on the track that gets in your way.

The name of the game, literally, is to “pivot" your circle around the center point by touching either side of the screen and avoid the various kinds of obstacles that come up along the track. Because the track is just a line, Pivvot can feel like one of those endless runners where you need to flip between different sides of the track, though you’ll also need to take into account the time it takes for your pendulum-like character to move out of the way. It’s a bit hard to describe with words, but you should get a good idea of what Pivvot is all about by checking out this trailer.

It’s a clever and challenging game, testing your reflexes and ability to quickly assess each situation as it comes your way. There’s a level-based campaing and an endless mode, as well as more difficult, unlockable versions of each. There’s also a “Berserk" mode, which sounds like the “so difficult it will make you cry" mode. I’m already finding myself trying, retrying, and then retrying again to make it just a wee bit further than my last run in Pivvot, so I think Whitaker is on to another winner here. Add Pivvot to your TouchArcade (Free) Watch List to get notified of its US release, and see what others are saying about the game in our forums.