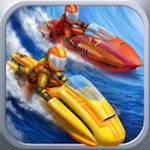 Riptide GP2 is what you think it is: an arcade wave racing game featuring tons of speed, tons of waves, and tons of sick tricks to pull off when your hydro jet blasts off from a big wave or conveniently placed ramp.

Content is something GP2 offers. The game supports a full campaign mode that takes place across a bunch of different locales. The track design in particular is really cool: this isn’t a simulation, so the had license to create super hip, sci-fi environments brimming with oddities and challenging bends and twists.

This thing also has a persistent upgrade system. As you race and earn dough from races, you can spray that cash back into your hydro jet, making it faster. You can also buy new and sleeker jets as you progress. 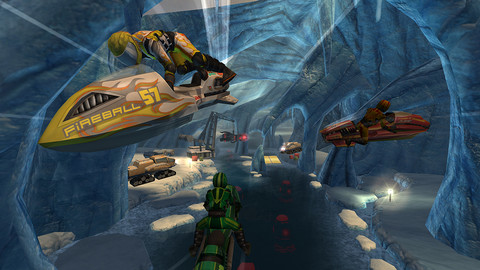 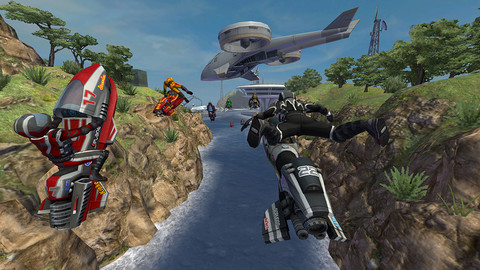 Also, four-player multiplayer is a thing in these. You, along with three pals or randoms from anywhere in the world, can race competitively across the game’s locales. We’ve been trying to test this to make sure it works, but because it isn’t out worldwide yet, we’ve been stuck in an eternal Looking For Match queue. This is one of those things we’ll make sure about when we look at the game more closely after launch.

About those stunts — with gestures, you can pull off a variety of sick moves. Like, for example, pressing two fingers on the screen and pushing left activates a move where your dude takes his feet off the jet and pushes them out to the side. Doing this stuff looks cool and also serves the purpose of restoring your “boost" or turbo.

Another thing to like about this? The controls are good. GP2 offers a variety of control options, including tilt. Our current fave is the second method, which has you holding on the left or right-hand side of the screen whenever you want to turn your jet.

Needless to say, there’s a lot to cover here that we’re just now getting a peek at as we play an NZ build this morning. But if seems pretty safe to say that if you’re into water sports, GP2 should probably be something you should consider grabbing.

We’ll have some much more detailed impressions later, so look out for those. Riptide GP2 comes out tonight at 11:00PM EST.