Delta-V Racing from Spacehopper Studios is a frantic new racing game coming to the App Store tonight, and since giving the international version a spin earlier today I haven’t been able to put it down.

Spacehopper has distilled the fun and chaos of combat-focused racing games like Mario Kart and Wipeout into a 2D side-scrolling affair that works tremendously well on the touchscreen.

You control your racer like you would in a side-scrolling shoot ’em up like R-Type, using the touchscreen to maneuver your ship up and down. Delta-V uses relative touch so you can pretty much touch anywhere you feel is comfortable.

As you race through the tracks you’ll come across weapon pick-ups, and the way this is handled is very clever. Pick up one and you’ll get a basic cannon shot, but if you hold off on using it and pick up another weapon icon you’ll get the next, more powerful weapon that’s in play. 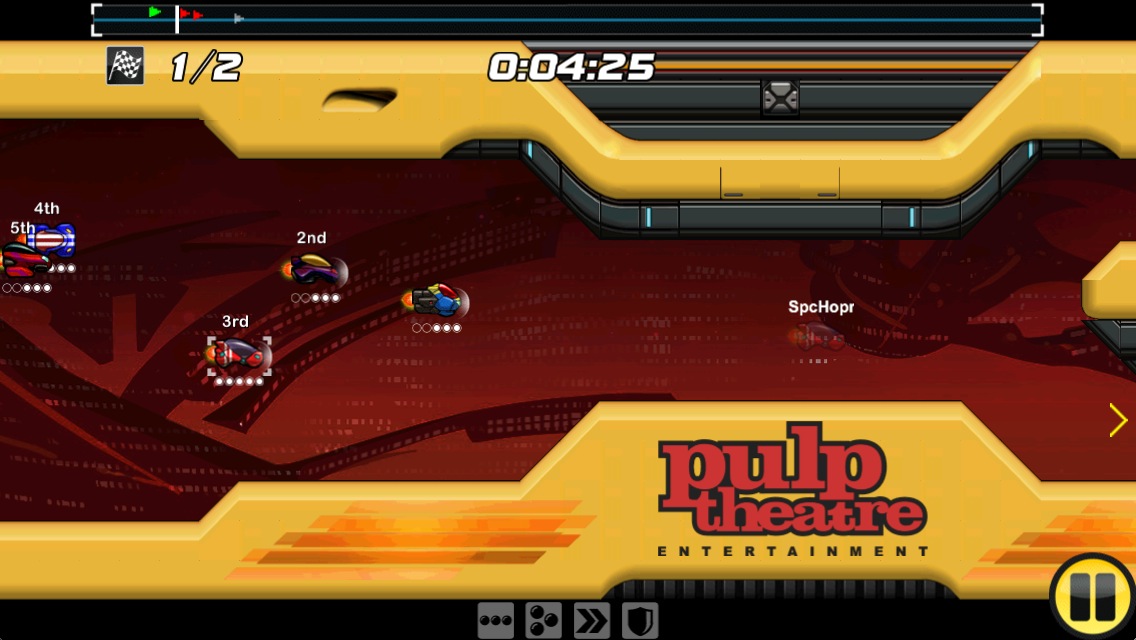 It always drove me nuts in Mario Kart when you’d have a weapon in your slot and then drive through another weapon pick-up that basically did nothing, since your slot was already full. Here you can strategize by using or not using weapons until you get the one you really want or need.

Of course, there are other racers on the track, and weapons are used to slow them down. There are also boost pads as well as anti-boost pads, and the main focus of Delta-V is finishing each track as quickly as possible. So becoming familiar with a level’s layout and where the boost pads are is paramount to being successful. All the while you’ll need to be aware of where you opponents are and avoid getting blasted by them.

Not every level is a race against the AI players though. There’s a nice variety of race types, some which have you beating a set time, or surviving as long as you can as your vehicle continuously accelerates. These kinds of races offer a nice change of pace, but I think the races which feature opponents and weapons are the real bread and butter of Delta-V Racing.

The thing that has had me glued to the game all morning is the online integration. After every race you’ll see where you stack up against others on the leaderboard and it’s hard not to go back and retry stages over and over in an effort to shave tenths of seconds off your time and move up a few notches. This will end up being a very competitive game, I think. There’s no direct real-time multiplayer, which would likely be very awesome, but you do get to race against the ghost of whoever has the top time which also entices you to keep doing better and better.

With 36 events spread across 4 increasingly difficult tournaments, and 8 different cars to unlock and master, Delta-V Racing should keep you plenty busy just completing all its content alone. Throw in the online competition element and this one might be staying on my device for a very long time indeed.