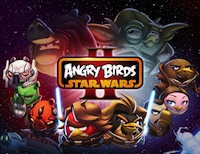 Angry Birds Star Wars II is indeed a thing that is happening. Creator Rovio Mobile confirmed as much this morning, and also put a release date on it: this September 19. Interestingly, this won’t be your everyday Angry Birds title — it’ll use toys, allowing players to swap birds in and out of the game by placing their corporeal, plastic-y forms on their iPads.

Think Skylanders, except with Angry Birds Star Wars merchandise. The new trailer for the game shows off the interaction between toy and game. Basically, you just plop a toy on the front-facing camera and, bam, it’s in the game:

The toys, dubbed “Telepods," are being made via a partnership with Hasbro. And you’ve got to think that a generic name like that lends itself to more than just Angry Birds toys down the line. Regardless, more than 30 toys are being created specifically for this.

Anecdotally, we’ve seen Angry Birds merchandise drying up a bit. Maybe this is the shot in the arm that the franchise has needed to get its stuff out of the clearance bins at Wal-Marts across the country.