Kavinsky (Free) is a bit of an oddball. I get the feeling that it’s going to be a love or hate affair. So before you read too far along, let’s first decide whether you will indeed love or hate it. Are you older than thirty-five? Do you love old-school, side-scrolling brawlers? Are you fond of ’80s music and Ferrari Testarossas? If you answered yes to any of those questions, you will no doubt love Kavinsky. If not, you are either too young, have no soul, or both.

Now I’ll admit, I love it. One of my favourite games of all time is Out-Run. I own the arcade perfect translation for Sega Saturn and also possess the ports for Sega Genesis, Master System and the rather shoddy version for Commodore 64. Luckily, Kavinsky loves Out-Run, too. In fact, the game is nothing more than an advert for his album of the same name. Hell, Kavinsky even drives a Testarossa in the real world, so he’s practically living in a 1986 Sega arcade cabinet.

You’re probably thinking right now, “Hang on, I thought Kavinsky was a game… he’s a person, too?" The answer is yes. Kavinsky, born Vincent Belorgey, is a French house music artist who has a penchant for ’80s movie themes and if you enjoyed the musical style of Grand Theft Auto: Vice City, you’ll be very fond of the ditties strewn throughout Kavinsky… the game. Right, this could get confusing… let’s forget about the man for now, and talk about the game. 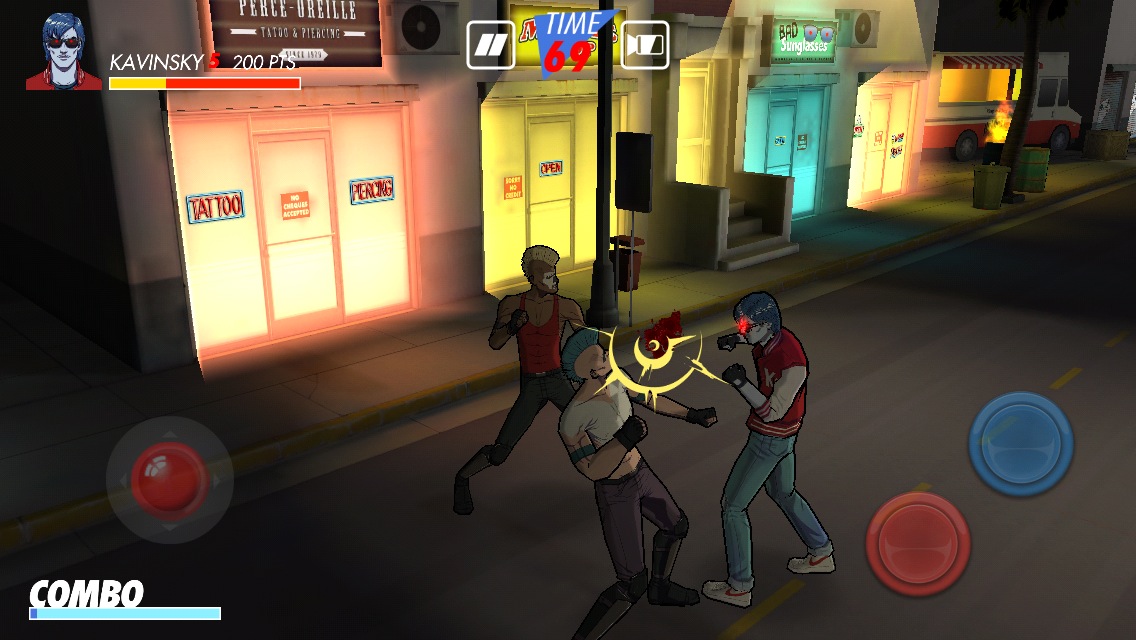 Back to why I love it. Kavinsky is a retro-inspired beat’em up which pays homage to the classics such as Final Fight ($2.99) and Double Dragon ($0.99), and for good measure has a bit of a head nod to Out-Run thrown in, via two driving stages. The game is rather short, consisting of only six levels, though there are more to come if the icons on the level select screen are to be believed.

The stages are split into three different gameplay styles. The first and fourth stages are your standard side-scrolling beat’em up affair. You have two buttons which correlate to punch and kick, and movement is controlled via an onscreen joystick. Kavinsky moves around at a rather leisurely pace, but push the joystick that extra bit further and he will be coaxed into a jog, speeding things up a bit. 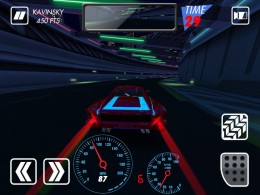 The actual fighting is shallow, with the punch and kick buttons doing just that… punching and kicking. There are no fancy extra moves such as knees and headbutts, as seen in classics of the genre, such as Double Dragon and Streets of Rage (Free), but it is a bit of button-bashing stress release. Also, you have a combo meter that increases as you hand out the whup-ass and when full, unleashes a barrage of flying fists, making short work of your opponents.

The problem with this system is that there is no control over it, so if you happen to trigger the combo mode when you have already beaten ten shades of the smelly stuff out of your opponent, all of the fisticuff goodness will be wasted on punching the sky. A dedicated button would seem like a much more useful option. As well as the punching and kicking, there’s also smoking and drinking to be had, with cigarettes and beer being dotted around the stages as politically incorrect, life-increasing collectibles. Kavinsky is also fond of the odd dirty magazine, it seems…

The enemies are your standard fare, circa 1985 street punks and oddly, cops and security guards seem hell bent on punching you in the mouth, too. The baddies tend to surround you but, more often than not, only attack one at a time, making it a fairly easy task to send them to Davy Jones’ locker. 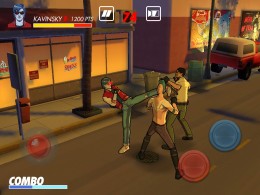 At the end of these street brawling stages, you encounter a boss. These guys aren’t too great at fighting, nor are they rocket scientists, but do take a few hits to knock’em down and are rather large. Ridiculously large, in fact – a real throwback to the ’80s beat-em-up. The violence can be viewed through several camera angles, including a very cool pixelated retro mode that I discovered by trying to play the arcade machine in the background of the first level.

Levels two and five involve a wee bit of augmented reality. The game instructs you to take a photo of a background with a high level of detail and to hold your device parallel to it throughout the stage. Whatever you choose to shoot becomes the floor on which the stage is set. These levels provide a bird’s eye view of Kavinsky and his Testarossa and you have to vanquish the bad dudes before they succeed in turning your sweet ride into a twisted pile of burning metal. I’m not quite sure why there was the need to add in the augmented reality gimmick, as it adds nothing to the game, but I suppose it can be fun to watch a Ferrari burn on your cat’s face.

The third and final stages of Kavinsky are the driving stages. You find yourself being chased down by a horde of rejects from either Mad Max or Waterworld and need to “Out-Run" them by passing through a bunch of checkpoints, before time runs out. As someone in the forums mentioned, the default tilt controls are akin to driving a bar of soap, but simply pause the game, select the onscreen arrows and you’ll be in your happy place.

As stated earlier, the whole experience is over pretty quickly but for me it was a welcome trip down memory lane. The graphics are gorgeous, the sound suitably ’80s epic, thanks to the music of Kavinsky himself, and despite the gameplay being as deep as a hobo’s pockets, the various game modes make for a diverse enough experience to see through to the end, though there’s probably not a whole heap to keep you coming back for more. It should also be mentioned that there are quite a few graphical glitches, most notably when enemies walk through walls, which is a bit of a shame, considering the overall look of the game is fantastic.

At the end of the day, Kavinsky is a shiny, shallow, yet highly enjoyable romp through the 1980s and well worth picking up, especially considering that the game is totally free and there is no IAP to speak of. I truly enjoyed my time with Kavinsky, though I must admit, I have some rather fond memories of spending all my pocket money after school at the Final Fight machine, so these kinds of throwbacks really tug at my heartstrings… so much so, that I think I’ll even buy Kavinsky’s album and listen to it while playing Out-Run.