We’ve been rather enjoying Deus Ex: The Fall ($4.99) since it suddenly popped up in the App Store early yesterday, and many of our forum members eagerly began downloading the highly-antiicpated title as soon as it became available. However, some of those members have been treated to a harsh surprise upon trying to play the game, as Square Enix seems to have built in a form of piracy prevention that prevents players with jailbroken devices from playing Deus Ex properly. If you have a jailbroken device and you load up the game, you’ll be treated to this screen, posted by one of our forum members: 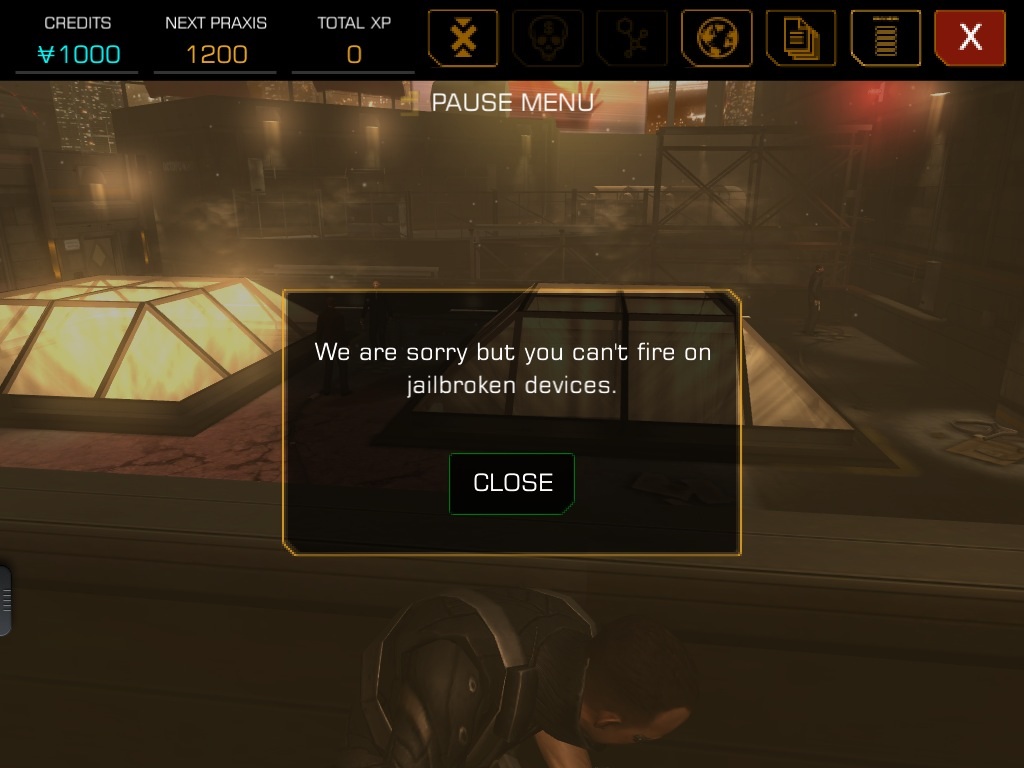 That’s right, if you’re jailbroken you can technically play Deus Ex: The Fall, but you won’t be able to fire your weapon. So, really, you can’t play Deus Ex: The Fall. Now, inserting clever anti-piracy tactics is nothing new, and I’ve definitely had a chuckle over some of the ideas developers have come up with to deal with the piracy problem. However, as many iOS users know, jailbreaking has been around forever and is used for much more than just pirating apps from the App Store. Effectively excluding all jailbreakers seems a tad unfair.

The flip side of that, though, is that if you are jailbroken, you’re technically running an unauthorized operating system on your device, and nobody is obligated to make sure that things work fine on that operating system. I tend to lean more towards this side of the coin for things like bugs and unexpected software behaviors, though. I mean, if you’re choosing to be jailbroken and something doesn’t work quite right because of it, that’s kind of on you for not running the tested and approved operating system, and I don’t feel that developers should have to go out of their way to fix those particular issues. But something that was explicitly built into a game just to mess with jailbroken devices? Well, I’m not totally sure how I feel about that just yet.

It seems like it would have been a good idea to at least let people know about this in the iTunes description or something, since you can very easily drop the money to buy Deus Ex: The Fall without realizing you can’t play it properly on a jailbroken device. And I’m not so sure if Apple would be keen on giving you a refund, either, since they aren’t fans of people altering their operating system. So you might just be out the $7 bucks.

It’s definitely a weird situation, and it’ll be interesting to see if Square Enix sticks to their guns about this or if they eventually back off, since there are plenty of jailbreakers that legitimately purchase their apps. For now, though, buyer beware if you’re jailbroken. There seems to be ways around this situation, which I’m sure you can find on your own with a Google search or two, but we’ll keep our ears open for any word from Square Enix if this limitation will stand or not.