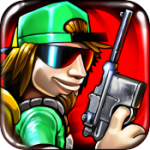 One of the coolest things about the rise of independent games combined with a global digital market is that we are seeing more and more games developed in countries we don’t typically associate with games. We’ve all played our fair share of games from Japan, the USA, the UK, France, and Canada, but now almost every country is joining the fray, with some interesting results. Moscow Dash (Free), from Russian publisher Star Computers Trading, is a fine example.

Although it sounds like the title of a runner, Moscow Dash is actually a side-scrolling arcade shooter. You play as the Courier, a man who goes to some pretty serious lengths to deliver his surely-innocent packages to his clients. You’ll shoot your way through the various districts of Moscow, down back alleys, through subways, and across overpasses. The areas allow full 3D movement, similar to classics like NARC. There’s so much carnage that it feels like a zombie game, but while you’ll be facing shambling hordes, the enemies in this game are villains of a different stripe. 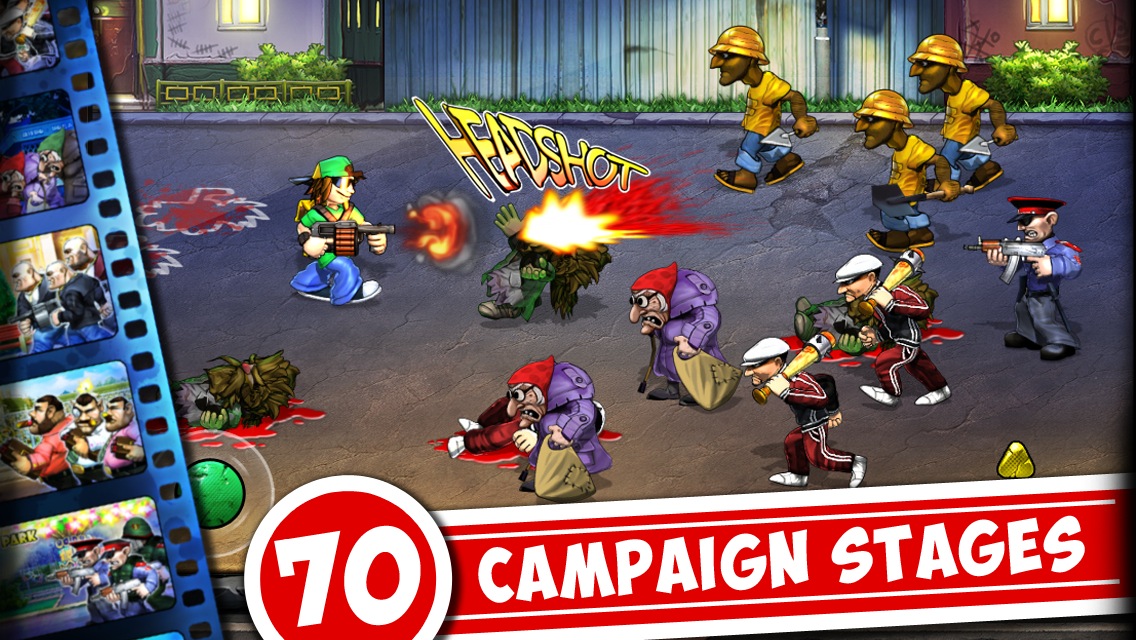 I’m not sure if the game is meaning to be taken as a kind of social commentary, or if they’re just having fun, but the enemy types in this game are certainly interesting. The homeless, the crooked, the rich, the bureaucrats, the police, you’ll be slaughtering all of them by the thousands. The game’s description refers to them as monsters created by harsh realities, so I guess social commentary it is. At any rate, they’re all fairly aggressive, and their large numbers can be more than a little overwhelming, so you have to keep shooting even if you feel bad for icing a baglady.

You’ll start off the game with a pretty weak gun that can fire four shots before reloading. Beating bosses will expand your arsenal, eventually leaving you with five different weapons, three of which can be equipped for any given stage. Some bosses will also drop upgrades for your guns, giving you a larger clip, more powerful shots, or added firing capabilities such as rockets. The more powerful the gun is, the longer it takes to reload, so you’ll want to choose your guns carefully to minimize the amount of time you’ll spend defenseless. In the early going, when you only have one or two guns, it’s pretty easy to get overwhelmed if you’re not careful. 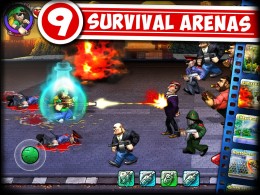 As you play through the game, you’ll also earn experience points that you can use to level up your health, luck, and walking speed. The Courier is painfully slow in the early stages of the game, so you’ll want to work on that stat to save yourself some trouble with the bosses. No matter how you choose, your character will most likely be at or near the maximum level by the end of the game, so you don’t need to think too hard about where you’re putting your points. Moscow Dash uses virtual controls, but they’re very easy to use. An on-screen stick moves your character around, and two buttons allow you to shoot left and right. It’s very intuitive, though the simplicity of the game’s design is certainly largely responsible for that, as your character can do very little aside from walking and shooting.

Occasionally, enemies will drop special items. Along with standard items like health-restoring beer, energy drinks that give you a temporary speed boost, and invincibility-granting hooch, you can also pick up icons that allow you to summon certain enemies as allies. They’re no stronger than they were as regular enemies, and they take damage from your weapons, so they’re of little use except as a distraction, but it’s still a nice touch. These items can also be leveled up to increase their duration or summon more allies.

There’s a fair bit of content for a game of this genre, with nine fairly large stages, each of which will take you around 15 minutes or so to clear. There are frequent checkpoints, so if you die, you can easily continue without losing much progress. Unfortunately, the game is not very hard, so you’ll probably blow through it pretty quickly, especially once you have a full arsenal and a powered-up Courier. Still, thanks to the game’s large variety of enemies, it’s a fairly interesting ride while it lasts. In addition to the main campaign, the game also has some survival arenas, where you’ll have to fend off enemies for a length of time, but this mode is locked behind an IAP paywall that costs as much as the game itself, and really doesn’t add much to the experience.

From a gameplay perspective, Moscow Dash is servicable but nothing special. Happily, the game has some excellent presentation to make up for some of its shortcomings. The graphics are very well-drawn, with nicely animated character sprites packed full of personality. The game also has an inexplicably rocking soundtrack, providing some great tunes to wreak havoc to. The guns have a nice impact to them in terms of sound effects, too, which is an important part of a shooter. The exaggerated drawing style, great tunes, and thumping gunfire remind me a bit of Metal Slug, which is a pretty good place to be in terms of presentation.

You’ll have a great time with Moscow Dash on your first playthrough. Unfortunately, apart from cleaning up Game Center achievements, there isn’t really a lot of incentive to replay the game once you’ve finished it, apart from the actual joy of playing. Still, it’s got a lot of charm thanks to its excellent presentation, and it’s kind of neat to see another culture’s take on a well-worn genre. If a bit of low-pressure, high-violence 2D content tourism sounds good to you, you might want to give this one a look.