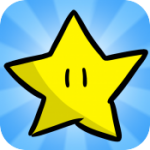 Star Thief  (Free) is ironically named, considering it’s a patchwork of other great gaming experiences. The finger-slicing controls of Fruit Ninja? Check. Stars that look like they belong in a Mario game? Check. Fortunately, like its influences, it’s fun. Unfortunately, it’s also a bit shallow.

In Star Thief, Sammy the Star is stolen, and you need to help Melvin the Moon find him. It’s basically the plot of Taken, but way more family friendly.

Over the course of 50 short stages, the object is to pick up every single star. The camera pans right, and you can either tap or swipe your finger to pick up stars. You’re racing against the camera, and interacting with the environment to complete each level. That’s the whole game. You just pick up all the stars. Pick up no less than seven per level. Levels pick up speed, and obstacles temporarily freeze you, keeping you from picking up stars. 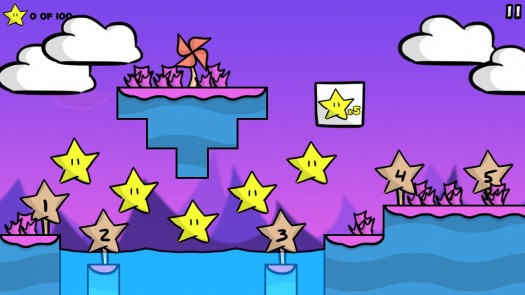 The art design, like the game, is basic and satisfying. The music is poppy, and the sound of picking up stars never gets old.

The game utilizes multitouch functionality, and it’s necessary to multitask with two or three fingers to master some stages. At its best, Star Thief forces players into a game of fingertip twister. Manipulating environments and collecting stars without actually controlling a character is reminiscent of the chaotic charms of Kirby: Canvas Curse.

It’s as simple as it is fun. It’s so simple and so fun that I played Star Thief all the way through in one sitting. It left me wanting more. Way, way more. And that’s a problem.

In under two hours, I was able to finish all but one stage perfectly. I never had to do a level more than two or three times. The developers, Bright Night Games, promise free level pack updates, which is good to know. I’m hoping they’ll add some new mechanics, because right now, Star Thief is empty calories. Empty calories can be delicious, but sometimes you want a little more than cereal with pixie sticks and chocolate milk. And if I’m going to have the cereal with pixie sticks and chocolate milk, at least make it a decent portion.

People in the forums are really getting into Star Thief, and I can see why. It just does one thing, but it does it well. If it did that one thing well for a little bit longer, I’d recommend it with few reservations. But the ride was way too short, and the whole experience was just a bit too forgettable.

Star Thief feels like one heck of a demo. I’m looking forward to playing the whole game.