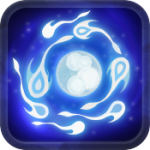 A flow of liquid gurgles with the inscrutable distance and hollow resonance of undersea sounds. Cavernous at this magnification, passages and expanses stretch to the peripheries of vision and worm off into the distance, hazed by the faintly colored substance that bloats them. In the depths of some unknown body, there is life.

Silhouetted in black, beds of plants and fungi often anchor themselves to the material composing the walls. They gently wave to invisible currents, sometimes broken by barbed, scorpion-like but unmoving shadows or other vaguely menacing shapes. Animal life, too, exists amongst the flora. But theirs is not so peaceful.

Small chittering creatures, oblong cell-like bodies with fluttering flagella, inhabit these waters. Some of these shine a stark white, sharply contrasting the dark walls and inky cellular creatures who slaughter the former. We join Hero of Many ($3.99) some time through their apparent genocide or subjugation at the will of the latter. 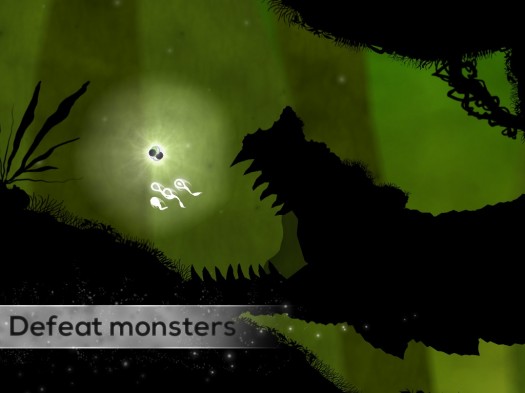 A single small, round cell falls from a swarm of fleeing white creatures, lost in the scuffle. Your character gently settles to a rest below, beginning your wordless adventure. A press of the finger serves as your method of navigation, spurring the cell toward it, with distance from the center governing speed.

As you explore two-dimensional planes, much like Aquaria or Metroid with anti-gravity, you’ll encounter friends and foes in roughly equal measure. Friends, separated and isolated in the aftermath of whatever momentous thing is happening, quickly move to join you as you approach. They act autonomously, darting toward and attacking the squiggly black beasties that threaten your life. As they eat, be it naturally growing sustenance of pieces torn from the bodies of foes, they’ll grow in size and strength. Light puzzle elements and environmental hazards are sprinkled throughout to lend variety. No element is ever overbearing, though challenge in general is lacking.

Hero of Many maintains a persistent sense of wonder. While occasional cutscenes pose dynamics between the animals, the wordless nature of it all leaves curiosity to drive you forward. There’s still very much a story, but it’s one you investigate and observe rather than receive through exposition. Some sort of journey or reunification or escape? It’s an immersive mystery.

Occasionally you forget the drive to understand. Excellent, often haunting ambient music pulls you in, and the trichromatic environments naturally startle and unsettle. On at least one occasion, it inspired genuine fright.

Hero of Many is meditative and unique. An enthralling experience that is, rather than acting as a fun distraction, a game you can lose yourself and invest in. An artistic achievement some may find lacking in gameplay, but I truly wish the App Store held more titles like this.