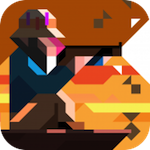 Looks like the cat (fish?) is out of the bag: in the near-ish future, Ridiculous Fishing ($2.99) will receive a huge content update, doubling the amount of stuff to do in the game. This update will also add a completely new narrative arc that’ll flesh out a bit more of the world, Vlambeer’s Rami Ismail confirmed at indie game event Rezzed to Digital Spy.

We’re not so sure what to expect, specifically. Will it star the game’s fisherman? Is it going to take place before or after the events of the game? Vlambeer isn’t talking about fine details. Yet.

“When we released the game, we promised people that for $2.99 they would get Ridiculous Fishing without any further in-app purchases or anything," Ismail said at the event. “We’re going to keep our word, but we want to emphasize that point that we were really serious about that."

“The plan we have now, if we pull it off the way we want to, we’re going to double the content and add a completely new narrative arc, and explore that world a bit further."

Sounds good, right? Ridiculous Fishing is one of the most electrifying games on the App Store today, and we’re more than stoked for new content. Here’s hoping new hats are in the works, too, because hats.