If you’re in the back seat of a car right now on the way back from Grand Prix Las Vegas like a few friends of mine and still want to play more Magic, you’re in luck- Magic 2014 is on the verge of a worldwide release this evening. It just hit the New Zealand App Store, and is slowly filtering across the rest of the App Store regions before appearing in the USA at 11:00 PM Eastern tonight. 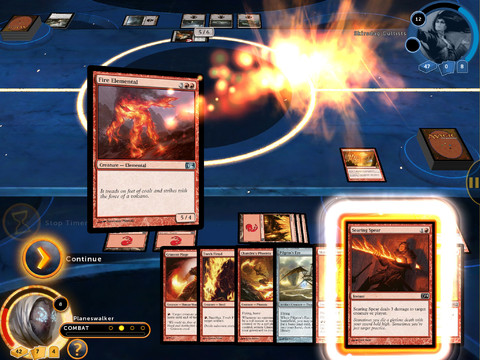 As seen in our E3 coverage of the game, the killer new feature of the 2014 variety is the new sealed deck mode where players actually build full decks out of booster packs- Just like playing real limited in a shop. I can’t wait to get my hands on this game tonight, as I hope it faithfully replicates the real-world experience of playing sealed in that you build a deck that you think is great from your card pool which seems awesome then just spend the whole night getting metaphorically pooped on.