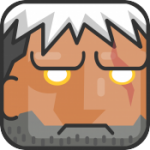 Hack’n slash beat’em ups aren’t exactly a new thing on any platform, and since the arrival (and success) of Castle Crashers many have tried and many have failed to recapture the essence of the genre.

Unfortunately, most of those attempts have been (or at least attempted to be) comedic and visually childish in nature, aiming for a cutesy Cartoon Network-like style instead of the dark and eerie visuals of the classics such as Golden Axe. Maximus (Free) is one of these games, only it gets it very, very right.

I will admit that I was put off by the visual style when I first glanced at the screenies and will also admit, ashamedly, that I wasn’t particularly fond of Castle Crashers. But after several mere seconds with Maximus in my hot, sweaty little hands, I knew I was onto something oh, so good.

Story-wise, Maximus is nothing new – save the girl, blah blah blah, though it is told in such an immensely humorous, self deprecating way, the actual story arc need not even matter. The cut scenes are a highlight and will have you giggling like a little girl. 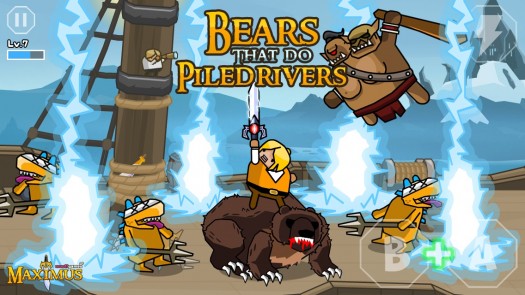 The developers at Mooff Games clearly have fond memories of Sega’s iconic steel on steel forest romp, Golden Axe. From the squat, cartoon version of Tyris Flare, the heroine of the Sega series, to the entire stage set on the back of a giant bird, the nods to one of history’s greatest beat’em ups are frequent and unabashed. Maximus doesn’t only pay homage to Golden Axe, however. Icons from retro pop-culture are strewn throughout the levels, from a boss resembling a morbidly obese Skeletor, to the ghost-like image, compete with Jedi robes, that Maximus becomes when he knocks on heaven’s door. And as for the game’s main villain, Mr. B, well I’ll leave that for you to find out, but he’s recognizable in more than a few ways.

As with the graphics, the action is insanely over the top. Barely a second goes by without being inundated by the plethora of enemy characters, all hell bent on ending your journey before you reach the obligatory end of level boss. This brings me to one of the only negative points about Maximus… sometimes the action can get a little too hectic, resulting in your character being hidden behind a wall of enemy sprites and the only thing you can really do to escape the mass beating is hit that button and hope. 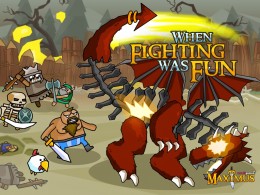 The controls in Maximus are smoother than George Clooney and simpler than Harry and Lloyd. You take control of your character by thumbing the left hand side of the screen. As you move your fifth digit about, a small white dot shoots about the screen, displaying the direction in which your character will run. Your right hand needn’t feel left out, as on that side of the screen is the attack button, which is later joined by a second (heavy) attack button, a plus sign, which connects both attack buttons and unleashes a brutal combo attack, and a magic button, allowing some real Golden Axe-like demon-slaying from above.

The extra attacks and magic need to be earned by leveling up, RPG style, and adding even more to the depth is the ability to select and equip items that can be purchased or earned during the game or via a “one-armed bandit" before each stage. You collect coins throughout the game, which can be used to upgrade your character’s stats and/or buy extra weapons, armor and even pets that help dish out the whup-ass.

There are four characters to select from, including Julius Meridius Maximus – the swashbuckler; Frank the Destroyer – who looks like the lovechild of Obelix and Balrog; Bishop – a Robin Hood like chap; and finally, Tyris Flare, erm, I mean Alyssa, complete with red and white bikini. 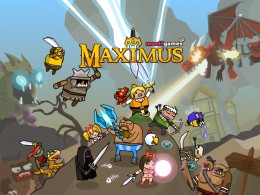 As well as the player characters, the game is packed to the brim with enemies from all walks of life and um, death. There are more nods to Golden Axe with the likes of skeleton warriors and even the little gnome-type guys who you kick up the jacksie, forcing them to drop food.

There are fourteen main levels in Maximus and extra modes become available upon the completion of certain levels, including a survival mode and a boss vs boss mode, where you spectate and gamble away your hard-earned coins. There’s also a mode called “Feasting Pit", which… well, I don’t know. The game is telling me I need to complete level nine, which I have done, but it still won’t open for me. (Update: The Feasting Pit mode is unlocked by completing level nine on “hard mode", this information was accidentally left out and an update has been released to fix this, along with other small bug fixes.)

Oh well, there is so much content in this gem of a title that a small bug that I’m certain will be quickly fixed, cannot put even a single drop of the wet stuff on my hack’n slash parade. One other miniscule gripe is that some of the larger sprite textures are obviously scaled up, standing out particularly on Retina devices. It’s not a deal-breaker but it does somewhat pop you out of the immersion of an otherwise all-enveloping gaming experience.

Ultimately, Maximus is an action role-playing game with fantastic controls, vibrant visuals, epic movie-score sound, massive boss battles and my favorite – loving references to a load of pop-culture phenomena that I fondly remember from my days as a tyke, as well as most certainly quite a few that I missed. There is more goodness than could be possibly covered in any review within Maximus. It’s a game with something for everyone, a retro romp the likes of which Ax battler would be proud and it is certainly being shown the love by the community over in the forums. Grab Maximus now. It’s free, and if you don’t like it, well… you have no soul.