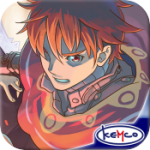 While the JRPG genre is mostly famous through the works of Square-Enix, Atlus, Namco, and Falcom, one little publisher keeps plugging away at the genre on iOS. RPG Covenant of Solitude ($6.99) is the latest effort from Kemco, and as usual, it’s a bit of a mixed bag with more than a few carelessly cut corners. With so many of these games just from Kemco itself, it’s sometimes hard to figure out how any particular one stands out.

Kemco has a few different developers that work on their iOS RPGs. One would hope for a bit of consistency across the various developers for at least basic things like controls or menus, but that’s rarely the case, so it helps to know which development team you’re getting. RPG Covenant of Solitude is from Magitec, who developed RPG Grinsia before this. It shares quite a few elements with that title, such as the art style, sideview battles similar to Final Fantasy, and eccentricities like burying the save option in a submenu and a mini-map that hops all over the screen trying not to block your view. Unfortunately, unlike Kemco’s last few games, this one is not a Universal app. 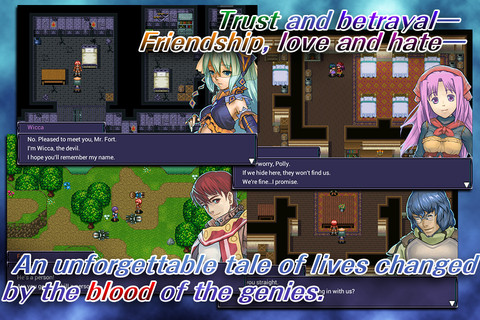 The hero of the game is Fort, who we meet in an opening cutscene with some of the most awkward exposition I’ve seen in some time. The game wastes no time telling us that Fort is an orphan, like his friends, but also that he is different somehow. He’s also kind to a bit of a fault. In other words, Fort is like virtually every other main character in a Kemco RPG. We also meet his friends, and they are very familiar, too. The sweet female friend who sticks up for Fort when other kids are picking on him, and the strong male friend who protects him but also has a bit of a rivalry with him for the affections of the female character. You can almost count down to when their peaceful little village gets ransacked. Then, something interesting happens.

Almost immediately, the story in Covenant turns a different corner from where you expect it to go, and it does this a few times through the course of the narrative. I’m not going to say this is the stuff of Final Fantasy or Dragon Quest, but it does at least turn a few tired cliches around on their heads, which keeps things interesting for the duration of the game’s twenty or so hours. Even though Fort himself is a bit of a one-note character, the supporting cast is fairly well-written, with some genuine depth in a couple of them. You’ll see the game’s final twist coming from a mile away, but it’s still fairly well-handled, a stark contrast to the extremely clumsy opening.

One thing that sets this apart from Magitec’s prior game is that Fort is the only true character in your party. The rest of your group will be filled out with monsters of your choice. There are four different types of monsters to choose from, along with four initial job classes you can select for them. As you can only have four members in your group at a time, you have to choose carefully which combinations you want to bring with you. You can change your job class at any time by using a fairly reasonably priced item, which will set you at the first level of the new job class, but with all of your old learned abilities intact, enabling you to create warrior-mages, priest-fighters, and so on. This isn’t new to the genre by any means, but it’s a nice layer of customization I’m not really accustomed to receiving from Kemco.

As mentioned before, battles take place in a side view battle screen and are turn-based. The enemy can appear in any of six spots on the screen, with various weapons and spells only able to target specific locations such as the front row. As in Grinsia, once you clear out the front row, the enemies in back will be pushed to the front, so there isn’t a huge amount of strategy here. Random encounters are sometimes quite dangerous if you’re unlucky, and some of the boss fights are very tense. Naturally, if you’re having trouble with a boss, you can always grind if you don’t feel like working out a strategy.

And grind you must, if you are insistent on experiencing the whole story of RPG Covenant of Solitude. See, like some of Kemco’s recent games, this game includes IAP in the form of a shop that sells various items. Most of the items are cheat-type stuff, like powerful cures, instant experience or gold, or overpowered equipment. Two of the pricier items, however, are keys that unlock extra dungeons. In the interests of fairness, you can earn the currency used to buy these items by killing monsters, with every ten monsters counting for one solitude point.

Each of the keys costs 750 solitude points to buy, and you don’t have to be Stephen Hawking to realize that’s a heck of a lot of dead creatures. In the course of playing through the game, I earned about 200 or so solitude points. That means if you want to unlock both extra dungeons without paying extra, you’re going to have to kill eight times the number of the monsters you would normally kill through the entire adventure. While I appreciate that there is a way to do it without paying, it’s pretty ridiculously out of reach for all but the most dedicated and/or insane. 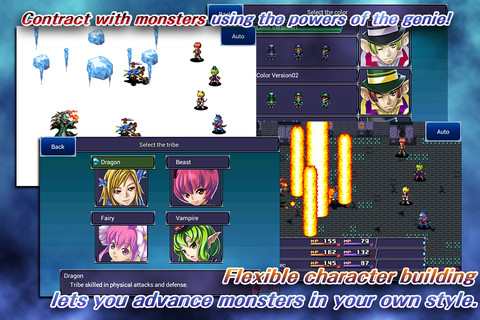 In the interests of science, I splurged on some IAP to see if the extra dungeons were worth the effort. The first of the two, the Abyss of Memories, is a fairly irritating map that reuses the tileset from about half of the regular dungeons in the game. It’s full of tough monsters that give a decent amount of experience points, but are extremely dangerous if you’re underleveled. I suppose that’s one benefit of grinding out the solitude points. There are some treasures in here, though mostly unremarkable, and a tough bonus boss. Completing this dungeon actually fills in some information on the story that can’t be found anywhere else, which is kind of a bummer. The second extra dungeon, the Lemming Tower, is full of the game’s answer to metal slimes, the lemmings, and is great for earning a ton of experience points in a short time if you can nail down the little fellows. Overall, I’d say if you’re going to unlock one of them, it should be the Abyss of Memories. Are either of them worth real money? Not really.

Dungeons in general are pretty badly designed. They’re full of damaging floor tiles, often require an obscene amount of backtracking, and really only use one of two or three tilesets. You’re even forced to go through a couple of the dungeons again, which is not exactly a thrill. The game provides an item and eventually a spell to circumvent the damage tiles and temporarily ward off random encounters, and you’re going to be using both now and then when your patience wears thin. Still, it’s not recommended to avoid too many battles, or you won’t be able to take down the trickier bosses. 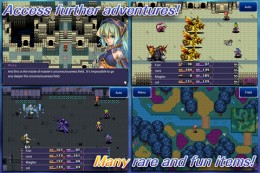 RPG Covenant of Solitude also suffers from a pretty shoddy localization. It’s all technically competent most of the time, but the phrasing is peculiar, and sometimes words are used that are by definition correct, but odd. For example, when you load your save file, the game asks “Okay to read this file?". There are also some glitches with the text in certain situations, leading to numbers being cut off or excluded, and incorrect pronoun use. Nothing is blatantly illegible, but the English script is perhaps best described as awkward.

In all other respects, this is a pretty standard JRPG. You go from town to town following plot points, you buy new equipment, you stay at the inn, you go into a dungeon, fight a boss, lather, rinse, repeat. Graphics are colorful and quite a bit better than Grinsia, and the music, while not offering a lot of variety, is decent enough. The controls offer a choice between touch and on-screen buttons, and you’re able to switch on and off the buttons without going into a config screen, so it’s easy to use both styles where appropriate.

RPG Covenant of Solitude is worth a play, as long as you enjoy JRPGs. It’s not particularly long, and it’s not really doing nothing special with its gameplay, but it will entertain you and occasionally challenge you, if nothing else. The story is interesting, it offers pretty good customization, and overall, it scratches an itch pretty nicely.