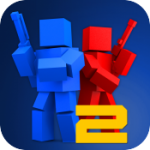 To the drone of determined electric rock, 3 Sprocket’s latest pits geometrical combatants against each other. Cubemen2 ($1.99) is a 3D soldier-marshaling strategy game of varying description. Many will start with the tour of defense levels that gradually metes out new content. More a sandbox for play than a defined, guided experience, however, it options configurable modes of tower defense, skirmishes, territory takeover, and more.

A majority of these are cross-platform multiplayer types that’ll substitute somewhat exploitable bots for other humans if you’d prefer. Usually it revolves around a TD-like stream of AI-driven units marching toward a static destination with intent to destroy someone’s home structure.

You’re presented with a gridded landscape of blocky tiered heights, by default a stark textureless monochrome that looks like rudimentary VR. Swipes and gestures of the fingers fling and zoom the camera around it with enjoyable ease and precision. Cuboids form the canyons, trenches, and castles that your selection of unit types parade about, following orders issued by tapping to select and tapping once more to direct. 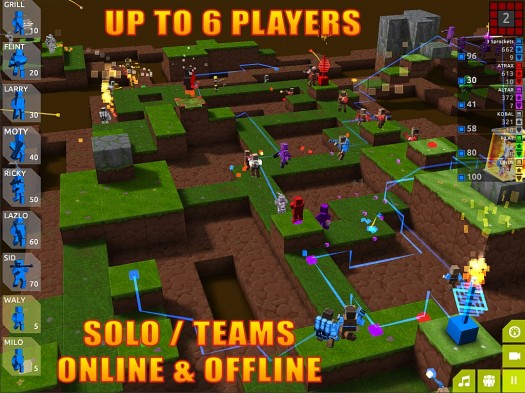 The titular men take up arms to become unit types with differing strengths and uses. Flamethrowers spout jets of individually damaging square flickers that pool in tight spaces but diffuse at range, while lasers don’t suffer the projectile travel times that occasionally result in misses. It can be a bit difficult to determine who’s effective in which situations, but there are tactics to uncover.

Executing them is decently fun. Plainly enjoyable, but not terribly. Variety exists in game modes, but none are particularly deep. Units feel fairly similar beyond some functional differences.

There’s a heavy element of customization and sharing. The former takes the form of extensive, though purely cosmetic, IAPs. You’re equipped with a couple freebie level themes and character skins – knights and grassy highlands, for example – but those most likely to interest are locked away.

On the other hand, there’s already an impressive set of free user made levels carried over from the slightly more aged PC version. With a suite of level construction tools built in (excepting the iPhone version), there’s the promise of ever more free content rolling out. Further, the process of selecting and playing new maps is almost identical to setting up a match on prepackaged stages – just wait a couple moment’s download time. There’s much to buy, yes, but everything that relates to gameplay is free.

It can feel directionless outside the simple campaign if you’re the type to need enduring goals. If that doesn’t bother you, there’s a content-rich strategy buffet waiting to be played. The crowd-sourced level generation systems are excellent, but new locales may not be enough to preserve your interest in Cubemen2‘s just okay gameplay.