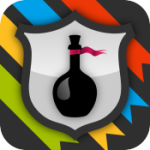 Alchemists (Free) by C&C Studio is an interesting and original board game for up to four players for iPad. To be honest, this is the first board style game I have played on the iPad and now I’m beginning to wonder why I haven’t done this before. Board games are fun, hence being called games. Before I got immersed in the world of digital gaming, I used to play the likes of Monopoly and Trivial Pursuit with friends and family. Heck, some of my fondest childhood memories are of sitting inside on a rainy day chucking the dice at the Snakes and Ladders board or even playing a game of Solitaire on the magnetic travel game gadget that my father bought me for my birthday. I still have that toy, that reddish brown box with bright blue knobs that you twist to rotate the vinyl scroll game board. Wait, where was I going with this? Oh, yeah…

The French development couple behind Alchemists, Klem and Larima, are also fond of the odd board game. This became quickly apparent after they moved to Huahine, a remote Pacific island in French Polynesia. Being so isolated meant many nights of entertainment by way of the trusty board and the couple frequently visited the squares and pawns of Small World, Catan and Ticket to Ride, each game being an important part of the inspiration process, according to Larima. 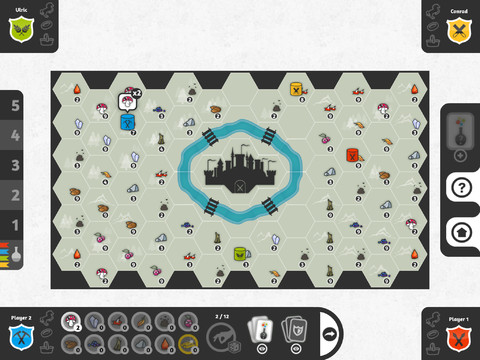 They soon decided to design their own custom board game and Klem was in a bit of a medieval mood, thanks to watching Game of Thrones. Soon enough they had several prototype games that consisted of pizza boxes for the boards and Lego pieces for the pawns and collectible items. Once perfected, Alchemists was transferred from greasy cardboard to Retina display.

The aim of the game is a relatively simple one. The players start out in a castle and from there they must move about the map, collecting ingredients which they use to create magic spells. Each player starts out with two spell cards and more can be picked up from the pile. The cards tell the player which items to collect and in what quantity in order to combine to create the potion. The potions vary in simplicity, with the more complex ones requiring more ingredients and also awarding more points once concocted.

Once the player has collected the ingredients needed to create their spell, they must make their way back to the castle, where they do the actual magic. Here in the castle, the player can also practice alchemy, the mystical art of creating gold, which can be used to purchase player upgrades (more on those in a minute) or do some trading with the castle stockpile, if lacking ingredients. These come at a price, though. You’ll have to hand over two ingredients for every one item you take and neither gold, nor the philosopher’s stone (used for making gold) are available “off the shelf".

Luckily, there’s a bit more to Alchemists than just roaming the land and stuffing crap in your backpack. You need to plan your trip carefully, as your player can only move one square (or in this case, hexagon) at a time and the ingredients are strewn throughout the board. This means careful scanning of the environment, as you might head off to the west to pick up the nearest pile of troll poo, only to realize when it’s too late that the pile of dung on the other side of the board is also right next to those berries you needed. On top of that, there are enemy attacks that spring up from time to time when you’re innocently trying to collect some nuts or dragon scales. These attacks result in the loss of ingredients. Luckily though, it’s not all bad news. 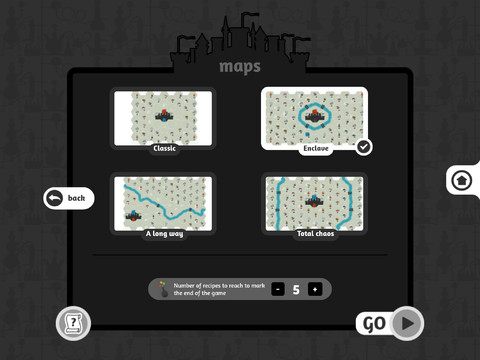 The player rolls the dice when on a square that contains a needed ingredient, the number on the dice directly effecting the number of items collected. If you’re lucky, you might find some gold or retrieve a card that can be used to fend off enemy attacks, or even steal ingredients from your foes. I had a barrel of laughs using the “Incognito" card… I waited until my better half was safely back inside the castle after a hefty trek halfway across the board and then I swiped her mushrooms without her knowing. Suffice to say, she wasn’t happy when she went to whip up her spell and some sod had stolen her stuff!

Visually, the game is well designed and aesthetically pleasing. It certainly looks like a board game and the colours and icons do a great job of immersing you in the fantasy world. I did find that it was a bit too easy to hit the “end turn" button by mistake, which is rather annoying, as every move is extremely precious. An update with an “Are you sure?" message would do the trick. Aurally, everything is top notch. Though there’s no need for a plethora of effects, what there is does the job nicely and the music is suitably atmospheric. There’s also the odd bit of humor dotted about, such as the aforementioned troll poo being one of the many ingredients.

By default, players can only move one position at a time and carry twelve ingredients in their satchel. By creating and spending gold, players can upgrade these attributes. The game is over when a player reaches the required amount of spells created, though the score isn’t revealed until after the game. This is because some spells are worth more points, so whilst you may have hit the five spell mark and ended the game, your enemy’s lower spell count could still win the match, if their spells are more complex and, ultimately, valuable.

The game comes with a variety of boards that adjust the way the game must be played by simply distributing the ingredients differently, changing the geographical layout and adjusting the size of the play area. For example, in the first and smallest board, each spot is relatively wealthy with the collectables, whereas later boards see you depleting the stashes quickly and having to move on in search of more of the same items, adding greatly to the strategic element of the game.

Alchemists is, for what appears to be a fairly basic concept, a rewarding and enveloping gaming experience that is a great time passer in single player mode, but the game really comes into its own when played with a friend or three. Whilst the AI does a great job of mimicking an upright monkey, it’s just not as fun to laugh at your iPad when you win, as there’s no danger that the iPad will punch you in the teeth. Unfortunately, I only have one friend, so was only able to play the game in single and two player modes but I daresay it would be an even more rewarding experience if you bump it up a player or two.

If you’re after something relaxing and a refreshing change from the plethora of endless runners and tower defense games that are cluttering up your iPad, you could do a hell of a lot worse than Alchemists.