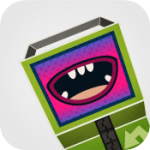 Gather around ladies and gentlemen, boys and girls, and allow me to present to you the papercraft circus. Let Paper Titans ($0.99) baffle and amaze or, alternatively, frustrate and fatigue as they traverse their wood fiber world. Blitz’s parchment constructed 3D puzzler is a visual and aural marvel whose beauty, to an extent, assuages the relative drudgery of its gameplay.

Your goal in each stage is to reach a lipstick-sealed envelope dangling from the grasp of paper birds. It’s stowed within easy reach somewhere about a folded amusement park stage, accompanied by a trio of optional hollow stars scattered afield, waiting to be collected. Such involves navigating your little green paper robots to each item, issuing orders by drawing lines and bypassing obstacles with the help of fellows as he goes.

You may skip straight to your goal, but it’d be painfully easy: what challenge there is comes correctly organizing your actors, each uniquely capable of dealing with a certain type of hurdle, to grab each star in turn before ending the level. Have a ruffley-collared accordion guy launch your collector up to a ledge he can’t return from too early and you’ll need to restart. 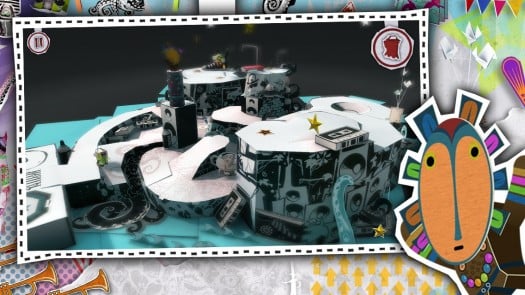 A bit of foresight into how to manage your live resources, and the puzzle is solved. Following that, you perform the repeating process of scooting your otherwise meandering minions to their proper places like giving stage direction to a cast of kindergarteners.

I kept expecting it to build in complexity. You gain additional paper creatures to direct around, yes, but I’m half way through and the game hasn’t expanded beyond figuring out the correct way of bustling them around in sequence and subsequently spending most of your time on each stage executing the solution. You’re a traffic director more than a problem solver, pointing drivers down ever more pretzeled routes.

A great aesthetic can go a long way, though. Textures of card stock, wrapping paper, and old print affectionately wrap every surface, consistently lovely to stare at. Rather excellent music plays in performers who are terribly excited to be here. Despite not having particularly engaging mechanics, there’s still some enjoyment to be had in bustling the little guys around.

The papercraft theme is driven home as you manually fold each new character type and artifact before it makes its appearance. A simple addition, but it adds a sense of ownership or parentage that endears the characters to you.

Delightful to watch and wonderful to listen to, but not terribly interesting to play. It’s a handsome exercise in the rote that falls short of what enthusiastic chin-scratching ambitions it may have had.