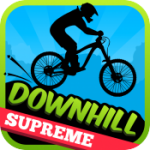 Upon starting Downhill Supreme ($0.99), you are greeted with a song. It’s strange as it doesn’t really fit any particular vibe or scene you would otherwise associate with a sport like mountain biking and is more akin to a royalty-free track fit for “MTV Cribs". Your eyes fare no better as you are also visually distracted. There are a lot of bright, vivid colors and there seems to be three NASCAR racers’ worth of logos strewn about. Superficially, it is a very busy game.

At its core, though, Downhill Supreme by ArtRB is only about one thing, and that is riding down mountains and cliffs at high speeds on nothing more than 30 pounds of metal and a prayer. You choose among 48 different side-scrolling tracks set across either canyons, mountains, or generally rocky terrain and divided across either the Rookie, Pro, or Elite categories. Based solely on your time, you will earn a rating of one to three stars as you descend varying tracks towards a goal and unlock additional bike parts.

None of those rewards matter, though, as they have zero impact on the gameplay (at least from what I could tell, though the feature list describes a “Suspension Sim”). Even the subdued yet manic melody at the beginning is taken out and replaced by the sounds of bike chains and intermittent rider grunting and crowd groaning. And all those bright, elementary school colors kind of fade out as your focus hones in on nothing but your racer. 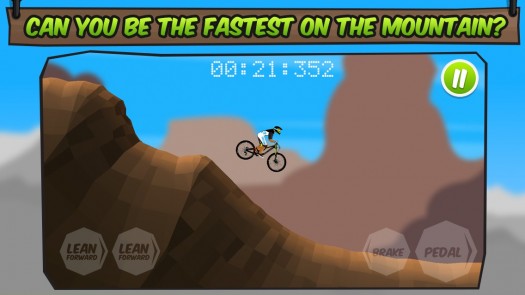 That’s a natural reaction, though, especially when you are cruising at such high speeds. What Downhill Supreme succeeds most at is conveying that sense of going so incredibly fast that you feel totally out of control. Towards the end of some tracks, I felt like my only chance at surviving was to simply gun it and hope I didn’t hit a kink and flip with no chance for recourse. It’s wonderfully exhilarating in that way, though it probably sets a poor example for real life biking.

The nuance of the game, however, is slightly less spectacular. The demands of the levels vary wildly, but most of them boil down to holding down the pedal button and not looking back. The “Learn to Manual” stage in the Rookie section, for instance, can be accomplished by doing exactly that and never fine-tuning your tilt (needless to say, I didn’t get a lot out of that lesson). Others like “Bad Habits” were impossible to complete with the same strategy as you’d crumple into a tangled mess of flesh and licensed bike parts after free falling 20 or 30 stories, but it could be solved by slamming on the brakes at the right time to gently ride down a less brutal slope. 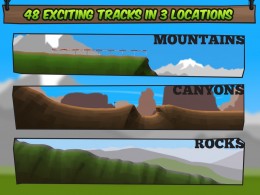 Few tracks require you to skillfully line up your landings and watch your riding angle on rapid bumps. But when they do, Downhill Supreme is a lot of fun. Most tracks have a couple moments that depend on a deft touch, but that isn’t usually enough to redeem the entire thing from the “I’ll never play that one again” category. The subtleties are there, though, such as pre-loading the suspension for jumps and figuring out how to maximize traction on botched landings, but it’s simply spread too thin.

And that’s a shame because this is an extremely short game. Over the course of an hour, I beat every level and got three stars on about 60% of them (the other 40% were two-stars). There promises to be more to freely download in the future, but even if this wasn’t a 99¢ game, its duration is disappointing.

You can try mixing up the control schemes and see if you can get additional jollies out of that. You can either use the left side to brake, the right to pedal, and tilt your device to lean; press a brake and pedal button on the right and flick a two-way joystick to lean on the left; or have an array of four buttons for leaning forward and backward and brake and pedal. I preferred the tilt scheme because I found it best for continually leaning back for more traction and facilitated landings, but the four-button setup was also pretty good. That was great for discovering I tinkered too much when things got hairy and taught me to be more patient. 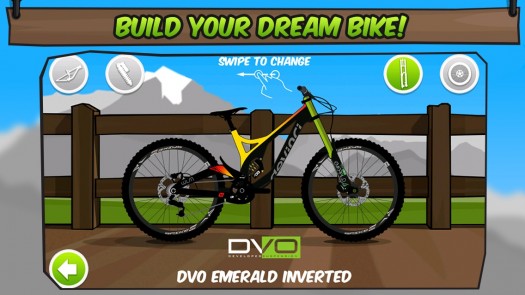 Problems arose with the digital joystick, though, since it was hard to mentally place where the center was and thus I found myself constantly over- or under-rotating. It became much more difficult to gain speed out of the bumpy rhythm sections and goosing extra air out of a jump that I was entering with suboptimal speeds.

Talking with some bicycle enthusiasts (and checking the forums), it seems that getting to equip real brands and seeing the suspension rotate to accurately reflect the frame it’s in are a huge boon to its overall value. For those of us that aren’t cycling fanatics, though, there’s still a great joy to be found in Downhill Supreme. Being on the edge of control as the goal approaches reminds me of running down a hill so fast that your legs can barely keep up, and it’s just as exciting. Finding the tracks that demand you to play skillfully rather than brutishly is a treat, albeit a brief hour-long one. It’s just a question of if you find that worth your dollar, and it’s a question on which I’m tilt—err, leaning towards: yes.