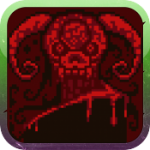 Evil’s brewing, and it’s up to the holy crusader and his pals to end it. Deep Dungeons of Doom ($1.99) celebrates a frequently trodden yet continuously enjoyable path with a suitably generic story and enough dry humor to keep it relevant. Wrapped in some gorgeous pixel art and animations, Bossa Studios has one satisfyingly bountiful iOS game on their hands.

Attacks, which are triggered with a tap on the right side of the screen, have a refractory period – you won’t be able to mash your way to success. Attempt an attack while the ability is cooling and you’ll prolong the cooldown. A tap on the left readies your guard, eliminating any damage the enemy might toss your way. Victory in each duel spurs the chest on the far side of the room to burst, spewing its contents of gold and, potentially, loot. A bottom up swipe of your finger will drag the screen up, sending your character deeper underground (and on to your next fight). Dungeon crawling without the crawling. 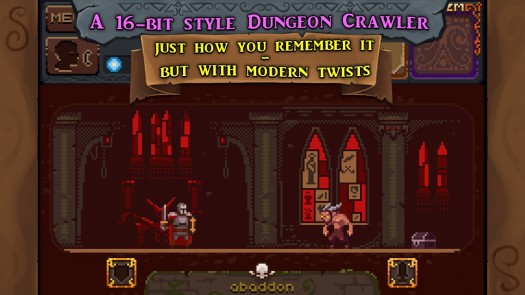 Each fight presents a chance of yielding a stat point. These act as a sort of inter-dungeon leveling system. You can pump up one of four attributes as you wish, but they’ll be wiped clean for the next outing. When you start from scratch every dungeon, each point strikes a significant impact. They’re satisfying and immediately meaningful choices each time.

A single equipment slot receives the passives-laden gear you’ll be drudging up through your adventure. Each carries its own mix of positive and negative effects, offering interesting and drastic gameplay consequences. You’re encouraged to consider the mix of your character’s existing aptitudes with the effects of each piece, rather than simply trading up.

It offers a rhythmic sort of pace. Attacks tune to the heartbeat of your cooldown, punctuated by preemptive blocks when your foe winds up for a blow. Each enemy type sports differing attack sequences and telegraph times, changing the melody to which you fight on each floor.

Pillaged gold acts as currency for both the item shops accessible during intermissions and a trio of upgrade lines for each character that, unlike stat points distributed mid dungeon, persist once purchased. It also serves as fodder for play-affecting IAPs, though they’re easily ignored. Purchased gold acts as substitute for unnecessary dungeon farming.

Rather, Deep Dungeons of Doom takes the meth dealer’s route to revenue generation: the first taste is always free. But you’ll come crawling back with open purse strings when you reach the end of your dose. Consider the free download a lengthy trial period. But don’t worry, it’s got enough meat to sink three bucks worth of teeth into.