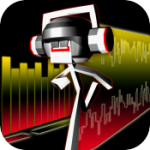 Let’s be clear: there is little danger of the world ever coming up short on games in the runner genre. Whether it’s running left to right, running into the screen, running out of the screen, or running late for dinner, you name it, there are plenty of examples of it available on the App Store. At this point, a runner can really only stand out by doing one of two things: being the absolute best take on the same old ideas, or by bringing a unique hook to the table. Radio Trek: Music Powered Runner (Free) will never be accused of the former, but it wears the latter with pride.

The gameplay of Radio Trek will be very familiar if you’ve ever played Temple Run or anything like it. Avoid incoming obstacles and collect currency (in this game, notes) by swiping to jump, slide, or move left and right. The obstacles are randomly generated to an extent so that the game is a little different every time. The hook is that the obstacles and notes for each stage are generated based on the music. Faster songs with pounding beats will generate a lot more of everything than a quiet, mellow song. Stages end when the song itself ends, at which point, if you’ve survived, you’ll earn a clear bonus in the form of more notes. There is no option to run endlessly and there is no score, beyond how many notes you’ve collected. 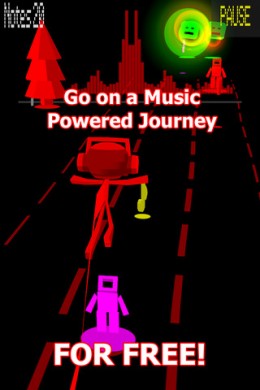 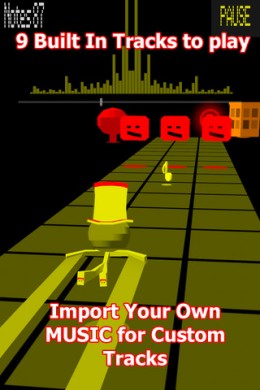 The game comes loaded with nine different songs, covering a variety of genres. You need to unlock each of them, at a cost of an increasing number of notes. The music is actually quite good, and the game sounds great with headphones. Unlocking all of these songs doesn’t take very long, however, so you’ll likely get through them all in fairly short order. At this point, the best thing you can do with the notes you collect is to spend them on the game’s most interesting feature: importing your own songs from your device’s music collection.

Yes, you can finally play a runner with stages generated from the dulcet tones of Burt Bacharach, if that’s your thing. As stage difficulty scales with the speed and intensity of the song, you can actually make the game more or less challenging as you see fit. Want to take it easy? Michael Bolton time. Up for a challenge? Give ‘Miserlou’ from the Pulp Fiction soundtrack a try. This feature is a lot of fun, and really elevates the experience offered by Radio Trek.

It’s a good thing, too, because in most other regards, Radio Trek really could use some work. The graphics in the game are very simple, albeit quite eye-catching, but the choice of colors and shifting camera angles frequently make avoiding obstacles more difficult than it should be. The interface is completely awful. Buttons for various options are placed in very poor places, the font choices are ugly, and the labels aren’t always clearly descriptive.

Perhaps worst of all, the controls just aren’t as good as they need to be. Swipes will occasionally be misunderstood by the game, causing you to move in a direction you didn’t intend to go in. It goes without saying this can bring an abrupt end to your run. Another very big problem is that the price for importing a song is somewhat steep. You’ll need to clear a stage three or four times to earn enough notes to import a song, and that wouldn’t be so bad except that you can only have one song imported at any given time. If you import another song, the previous one is gone and if you want to play it again, you’ll have to pay again. Moreover, if the App is completely closed at any point, even the one song you have imported will be cleared. Given the best part of the game is playing your own music, this is a major letdown.

Even with all of these problems, though, I still enjoy Radio Trek a lot. Its replayability is essentially limited only by your music library and your patience for its shortcomings. It’s frustrating, because with a couple of problems resolved, I’d be singing this game’s praises from the rooftops. As it is, it’s still worth checking out, as long as you aren’t completely sick of runners and have a little music in your heart (and iOS compatible device).