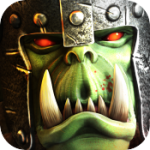 So Warhammer Quest ($2.99) finally hit the App Store last week. At least, I think it was last week, based on my glimpses of the outside world when I’ve been able to tear myself away from my iPhone screen long enough to take a look. If, like the rest of us, you’ve been getting a hefty dose of retro role-playing goodness, you might’ve noticed that it doesn’t hold your hand. In fact, it slaps it away. You have questions: what’s the difference between an accessory and a consumable? What does pinning do? Just what does the Lucky Rabbit’s Head do, anyway?

We have the answers. Well, OK, I lied about the last part, because after carrying it around for a few hours, I still have no idea what the Lucky Rabbit’s Head does, but and the strategies and tips we’ve put together will help with everything else. 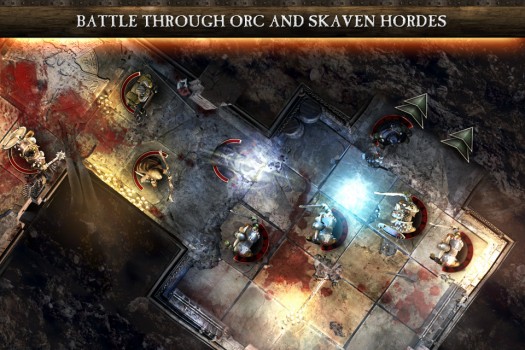 [Just FYI: this guide is going to assume you’re rolling through the base campaign with the starting four characters, though we’ll touch on the other classes and campaign a bit later.]

Battling The Randomness 101: Game the Generator

You might not be able to see the dice, but you’d better believe they’re rolling behind the scenes. Warhammer Quest is, at its heart, a very random game, and everything you can do as a player to mitigate this randomness will help you win. When kitting out your characters, you should always be thinking of how you can game the Random Number Generator in your favor. How can you do this? For one, focus each character’s items on their most important stat. You want your tank, who’s gonna be out there front-and-center, to be all about Toughness. I chose the Iron-Breaker for this, though the Marauder would work just as well. Make your other melee Warrior all about Strength. For my Grey Wizard, it was all about items that increase his Magic Pool, like the Grey College Hat and the Chalice of Fate so that he’d always have mana to fall back on, even in an ambush. 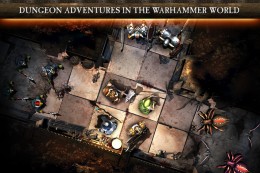 Certain skills can help, too: your Marauder on the brink of death? Don’t rely on Healing Mist, which might just heal a measly single wound, but spring for Blood Pulse instead, which may cost more but will heal a guaranteed five or more wounds. Another great way to cut down on randomness is to gather all your Warriors outside a new area and make sure you get a decent roll on the Winds of Magic before entering the area. As you play through the game, tailor your strategy toward giving your Warriors guaranteed hits and heals, or at least giving them the best odds to do what they do more successfully.

Battling The Randomness 107: Re-Use Your Items

Get the most bang for your buck out of quests and item purchases. You’ll notice that quests on the overworld are randomly generated. Many quests will task you with rescuing an NPC or killing a monster. Personally, I preferred the quests which rewarded you with an item at the end. I was always on the lookout for items my characters could use–these quest rewards aren’t available from merchants and are some of the best items in the game. Sure, a great shield could drop while you’re rescuing the town baker, but if you go into the dungeon with the shield at the end it’s a guaranteed get. On the flip side, when you’re in town you should always be thinking about making purchases that’ll allow you to give the item you’re replacing to another character as a hand-me-down. If you buy an awesome new axe for your Marauder who’s using an old longsword, he can pass the longsword off to your Grey Wizard. Better yet, find your Marauder a new longsword which itself can eventually be passed on to the Grey Wizard. The same goes for the Waywatcher’s bows, things like magic rings, and a bunch of stuff that both the Marauder and Iron-Breaker can use. 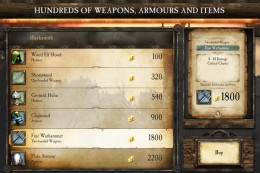 Think out your items! Warhammer Quest has a very unique item system, and while twelve slots might seem like a lot starting out, it won’t be long before you’re squeezing every bit out of each item tier. Consider an item’s rarity carefully. That rare bow won’t just be an upgrade for your Waywatcher, it’ll also free up an uncommon item slot you can use for equipment or potions. One thing the game doesn’t explain well is the difference between Consumables and Accessories.

Consumables are one-offs, like potions and scrolls, and once you use them they’re gone for good. Accessories are basically permanent Consumables that can be used once per dungeon. So while an Orb of Might can be used once for 4-6 mana and it’s gone for good, something like the Chalice of Fate I mentioned earlier can be used once per quest for 5-6 mana. Accessories are always preferable to Consumables. This doesn’t mean that Consumables should be overlooked! Especially late game, when your characters are kitted out in rarer items, make sure to stock up on common potions and bandages before battles, you’ll be surprised at the difference they make. When you can, scrolls are preferable to potions, as a warrior can use a scroll on anyone whereas a potion’s buff will only affect himself.

Finally, a word on the game’s IAP. As a five dollar title at release, there’s no doubt this is a premium game. Thankfully it’s IAP is wholly unnecessary, and the base game should be more than enough for most folks. If you’re really enjoying it, I highly recommend picking up the Skaven expansion as it adds a whole new region to the overworld, with six new towns, quests, and new enemy varieties and dungeon layouts. However, the additional Warrior Classes aren’t such an easy sell.

Much of this guide has dealt with how to one-up the game’s Random Number Generator, and two of the three new classes add a heap more randomness into a game that’s already full of nasty dice rolls. In addition to relying on Winds of Power, like the Grey Wizard, the Archmage has two schools of magic but is only granted access to one at random each turn; his spells are more expensive, too, requiring better dice rolls to use. So, too, with the Warrior Priest: each turn his link with his patron deity is randomly determined to be Strong or Weak, meaning that much of the time his buffs will simply fail, and that they might not even affect all of your party or even the warrior whom you’d hoped the prayer would boost. In a game so reliant on its RNG, these two classes add another layer of unpredictability when the smart player is seeking for ways to mitigate the randomness. The Dwarf Troll Slayer, on the other hand, is a good offensive warrior and much less unpredictable than the other two. If you’re like me, and decided to grab the three new warriors for a second playthrough, be warned that they don’t quite mesh so well as a group as the starting four warriors did–they’re still fun, though.

There you have it, folks. Warhammer Quest is a great game that bucks a lot of conventions of the RPG genre. As a faithful rendition of the popular board game which I played–and acted as Gamemaster–in my youth, it is old school in every sense of the phrase. It comes from an era where players didn’t expect a game to explain how things work behind the curtain. Hopefully this guide has given you a little peek behind that curtain.

If you’ve got any other suggestions, tips, or ideas for newcomers or veterans, lets us know in the comments!