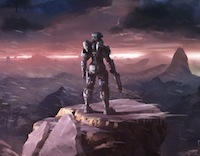 Halo: Spartan Assault is a top-down, twin-stick shooter that, from most accounts, seems to have that same open-y sort of sandbox combat feel that all the previous Halo FPS games have nailed. In other words, it’s an actual Halo game — except built for Windows 8, Windows 8 phones, and Windows 8 tablets. That’s kind of the rub; this thing isn’t yet slated to hit the App Store. Rather, it’s being billed as an “exclusive" for Windows platforms.

Why cover it over here then? Well, frankly, it seems like it has a decent shot to come to iPhone or iPad. We’ve heard rumblings that download numbers of Windows 8 exclusives are super low. Like, low to the point where it doesn’t make sense to have an exclusive that extends beyond a window. Also, with Microsoft set to double-down on SmartGlass, it seems kinda silly to keep cutting out the wider audience that it’s simultaneously trying to court with its built-in tech on the Xbone.

Regardless, Spartan Assault looks really cool. The campaign, which is set between Halo 3 and the events of Halo 4, will feature 25 missions. Also, it’ll offer weekly challenges and let users earn rewards for Halo 4 as they play.

When the game hits Windows 8 later this July, it’ll be priced at $6.99 and offer some sort of IAP scheme for upgrades and stuff. We’ll keep our eyes and ears open about an actual, confirmed port to iPhone and iPad.