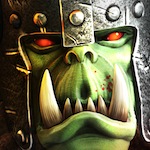 According to Wikipedia, “Snotlings" are cousins of Goblins and Orks. They’re smaller and are used by their much larger brethren as “cannon fodder, food, or cannon missiles." You can imagine tough life must be for these little dudes, but you’ll probably find yourself being an even bigger bully to them when you get your hands on Warhammer Quest later next week. Snotlings appear randomly in dungeons, mostly as buffers between you and important enemies that can actually hurt you. Tear through them quickly, and you’ll be better able to prioritize. Poor little Snotlings, always receiving hammers and swords to the face.

If you didn’t catch it, Warhammer Quest (and its legion of Snotlings) is coming to iPad and iPhone next week. Specifically, it’s hitting May 30. Rodeo says Quest supports iOS 6 and above, cloud saves, and it’ll debut as a Universal app. The price will be $4.99, which seems perfect.

Quest is one of those games that I can’t get enough of. It’s an insanely fluid loot-driven turn-based game with a lot of care put into the look, style, and mechanics. You can read more of my thoughts on that stuff in that link, but we’ve also got some video above, too. It’s coming so soon, guys!