I don’t have any history with Warhammer Quest. I didn’t catch it in 1995 when it started hitting shelves. Heck, I didn’t even know it existed until Rodeo Games announced that it was bringing the game to iPad. Usually, this kind of obliviousness is a Big Problem when it comes to playing board game ports. Studios tend to double-down on what made the board game great instead of focusing on making a good video game, leaving players with a super sluggish, systems-heavy title that kinda just makes you want to play the physical version instead of even bothering with the digital port. Credit goes to Rodeo for not doing this with Quest. It’s a video game first, and to a guy as clueless about the board game as I am, it basically just feels like a modern strategy RPG. That’s kinda wild.

Set in a universe bursting with crypts, wizards, orcs, spiders, and at least one magical lute, Quest revolves around an old-school premise: earn fame and fortune by plumbing the depths of the nastiest, monster-filled places in a cold, unforgiving fantasy land. You’re given control of a couple of axe-wielding bruisers, as well as an archer and mage at the start. 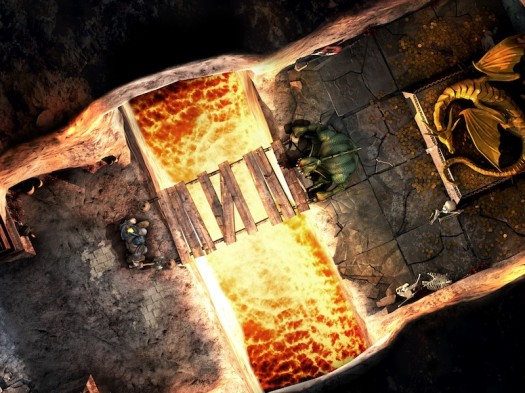 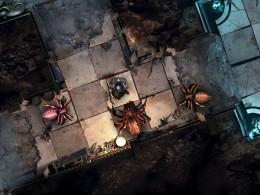 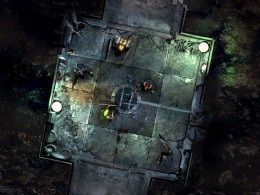 In practice, this setup is really not much more than a convenient excuse to keep sending you sending you from dungeon-to-dungeon. Oddly, this isn’t a problem: the core play loop is ridiculously rewarding, which is to say that combat is fun and the loot-grind aspect is consistently satisfying.

To rewind a sec, combat and movement are all grid-based. Dungeons, for the most part, consist of a series of super small rooms, all of which are shrouded in a fog of war. Movement takes place in real-time, which allows you to order your group efficiently across barren swathes of dungeons. Combat, on the other hand, is turn-based. The game automagically switches to turn-based when you bust into a room with enemies. A turn ends when every character uses up their allotment of actions. For the most part, you get one big movement and an attack and then it’s the AI’s turn.

There are a couple of wrinkles. Your bruisers can attack multiple times on a turn, if there are enemies immediately by them. The archer can attack once at range and once more if there’s anything near her. There are also a ton of potions and tonics in the game. Some buff your characters, others restore health or add ability points temporarily. 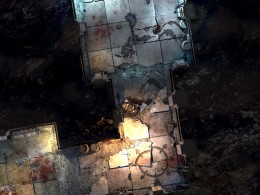 I love the fog of war component, by the way. It adds suspense, an unpredictability, to an otherwise mundane task in most dungeon-based games. You never know what’s behind the next door until you literally open it. Bolstering this is the scenario design, which consistently floods rooms with a just barely manageable amount of bad guys. Every time I open a door, I kinda expect a voice to say “Oh, you’ll fight alright," as the new room fills with Snotlings, spiders, orcs, and the like.

Further backing this up, there’s a random ambush component. The more time you spend in a dungeon, the more likely it is that a group of enemies are going to descend upon you out of nowhere. This keeps you moving into the fog, plugging away into the unknown.

After fights end, randomized loot is dished out. You can equip what you want or run back to town and sell everything off. Towns also offer heroes that can be recruited, as well as blessings, which may or may not pay off. Apparently, Rodeo will support Quest with DLC characters, which you’ll be able to grab here for real dough.

Another thing: as you clear dungeons and visit more and more towns, side quests become available. Some of these, at least, offer branching paths. For example, early in the game you’re charged with retrieving a magical lute for a stranger in town. After you grab it, you get a choice to give it back to him or not. If you give it to him, he stuns you with the lute and takes some of your gold. If you don’t give it to him, he ends up revealing himself as some sort of great thief, kidnaps a baron’s daughter, and takes her to a dungeon. You get a reward for saving her if you take up this extra quest.

I should note that this entire experience feels perfect on a FingerPad device. The UI is thoughtful and taps feel responsive. Quest will also support iCloud saves, but we’ll see how that goes.

I get the impression, just from the stability and polish of the build I’ve been playing, that Quest isn’t very far out all. Rodeo and Games Workshop aren’t talking about release dates quite yet, but we’ll see it in the next month or so.

Anyway, I’ve been loving what I’ve been playing, even if I can’t speak to how it’s different from the original version. If you like RPGs, though, you NEED to put this on your Watch List in our app (Free). You don’t want to miss this.