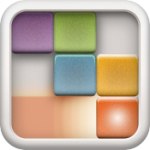 Appearances can be deceiving. In the App Store, Mosaique ($0.99) looks like it might be a generic block-pusher game, or some sort of warped Tetris clone. The truth is that developer Winning Blimp uses these familiar aesthetics to create something altogether completely different.

In Mosaique, Colored squares assemble onscreen in a seemingly random pattern, and you must navigate the screen’s perimeter to clear them by going to the side you want and then dispatching your colored square out into the field. You can only remove same-colored squares – send it out against something not matching your color, and the new color comes boomeranging back, and what you sent out originally takes its place.

It might sound somewhat complicated, but it really isn’t. It’s your level of mastery with this mechanic that will determine whether you’re a skillful player or merely just okay. It can be a little confusing at first, even with the tutorial, but the best way to understand Mosaique, alas, is to just try it for yourself. After spending a few hours with it, though, I can tell you: This is not a time-suck game in the traditional sense.

With soothing, almost meditative music playing, and a hyper-focus on the game’s sole mechanic, Mosaique can be downright distracting to the extent that the rest of the world can seemingly fall away and disappear. Falling under Mosaique’s spell, my entire world became these giant, differently hued pixels. Even though there’s not a ton of depth here, there’s something very absorbing about the game that’s difficult to articulate.

What prevents Mosaique from being too easy is your shot meter. Every time you spew a square out to try to remove more, it dissipates slightly. If you’re careless, your play sessions will be rather short. The only way to survive is by strategizing, Raiders of the Lost Ark-style, when Indy is trying to grab the idol. If you’re in a rush and just go for the easy shots, you’ll be penalized. But if you’re crafty and realize, “Hey, if I shoot this blue one here for this green one… then I can use it to line up all these purple ones after I move the yellow one,” well, then, you’ll fare much, much better. You’ll also be able to continue on, because obliterating two or more squares in one go is the only way to extend your shot meter.

“Winning” is defined by completing seven different, increasingly more difficult puzzles. The game isn’t timed, so you can take as long as you want to hem and haw, but unless you have a chess-master’s mind, you probably will need to dive in and just start square-swapping to crack how to best survive the world of Mosaique.