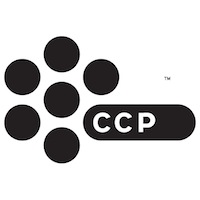 Iceland-based CCP Games is best known for EVE Online, a ruthless, Byzantine MMO set in the cold, vast reaches of a universe called New Eden, where player-led factions and alliances vie for political clout, territory, and the resources necessary to power their massive war machines.

EVE is a relatively niche MMO — it breached 500,000 subscribers only recently, after ten years of operation — but its players are devoted and loyal, and the game’s revenue has allowed CCP to expand consistently. They just released Dust 514, a free-to-play PlayStation 3 shooter that ties into EVE’s universe and in-game economy, and they’re working on World of Darkness, an MMO based on White Wolf’s legendary Vampire: the Masquerade pen-and-paper game.

CCP’s newest frontier, however, will be mobile development.

“We’ve been dabbling in mobile for a long time,” erstwhile EVE Online executive producer Jon Lander told me last month during CCP Fanfest 2013 in Reykjavik, Iceland. “But we’ve never really focused on it. We’ve never taken the time to put a clear strategy together about how these things fit in with our universe.”

The wheels to rectify that started turning earlier this year, when CCP quietly announced that Lander would be transitioning out of his role on EVE to “lead [the company’s] emerging mobile strategy.”

Mobile development — or, euphemistically, “out-of-client engagement” — was a recurring, if downplayed, theme across all of CCP’s projects at Fanfest. During her portion of the EVE Online keynote, senior producer Andie Nordgren discussed the necessity of giving players access to their accounts, even when they’re not actively logged in. Smartphone and tablet apps are one way of doing this, she explained, but plans for web- and browser-based systems are being hashed out as well.

World of Darkness senior producer Chris McDonough mentioned similar possibilities during a panel devoted to his game as well. “There will be access to in-game stuff, and all the levels of interactivity are being determined” McDonough explained to me in a follow-up interview. “When CCP is building EVE, they consider it a universe. The goal is that Dust 514 interacts with the same database that EVE exists in.”

“That interactivity allows the main database to be a platform,” he continued,  “World of Darkness is being built in a similar way.” 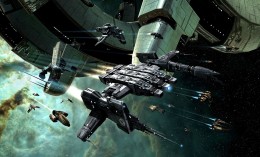 In the short term, CCP fans can look toward Dust 514: Neocom for the PlayStation Vita for a rough idea of what an iOS app might look like. Neocom, which is coming “soon,” will interact with most of Dust’s non-gameplay systems, including weapon and armor customization, starmap updates, and buying and selling consumable items. Jon Lander calls Neocom a “tracer bullet,” a lightweight project built by a small team to gauge interest in possible future companion apps.

“Ultimately, our strategy is to create bespoke experiences that are tailored to what our fans are using,” says Thor Gunnarsson, vice-president of business development at CCP. “Of course, they’re using tablets and smartphones, day-in and day-out. We want to bring another access point to them, wherever they are.”

Still, Neocom isn’t out yet and a Vita isn’t a smartphone or a tablet. “We’re not a mobile development house yet,” Lander admits. “We don’t know this stuff. But we can learn.”

Despite not having released a commercial app yet, CCP aren’t going in completely blind. Before joining CCP, Andie Nordgren spent time working on RJDJ, an audio app on iOS; Gunnarsson was at Ideaworks3D prior to shifting gears to help make a spaceship MMO.

Gunnarsson’s time at Ideaworks3D was spent developing mobile versions of big-name IPs like Final Fantasy, Metal Gear Solid, The Sims, and Tomb Raider for early mobile devices. “That was before iOS, obviously. We were actually doing our first 3D title on a Compaq iPaq in 2001,” he told me. 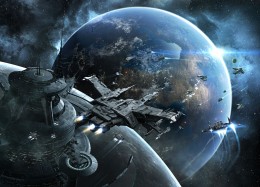 “Then we did a lot of titles on the Nokia N-Gage,” he says with a laugh. “We did four of the launch titles for that. It was weird to go from the most extreme, constrained corner of the games industry, which was mobile gaming at that time, to working on EVE Online with the team here.”

During his presentation during a keynote address on the last day of Fanfest, Lander detailed a bit of CCP’s checkered history with developing EVE-related mobile apps. In 2006, a team had created a working build of EVE Mobile, but it proved difficult to run on Tranquility, the London-based, single-shard server that houses the majority of worldwide EVE Online players.

By 2011, CCP had designed and developed apps for Nvidia-related mobile devices, but the project stalled out after the catastrophic launch of the EVE Online: Incarna expansion in June of that year. Amid player protests and a drop in subscribers, CCP was eventually forced to lay off 20% of its staff worldwide. Mobile development was put on the backburner again.

“My remit for EVE when I was made executive producer was to get it fixed, get it strong, get it in position where we can be ambitious again,” Lander tells me over drinks at a reception after the final keynote. He’s set to transition into mobile development full time later this summer, with a string of well-received expansions under his belt. “We’ve got a really good set of people in place so that we can take this on." 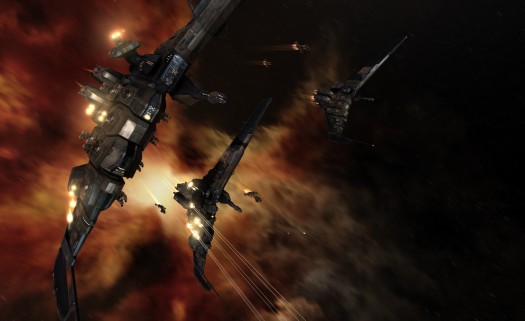 In addition to company-wide stability and growth, the development and release of Dust 514 has paved CCP’s foray into mobile development. According to Gunnarsson, Dust is built on a two-way programming interface, called CREST. In layman’s terms, Dust not only reads information from the EVE server, but is able to send information back. This is what allows in-game events in Dust 514 to also take effect in EVE Online.

“You can imagine that with that platform in place, we can start to create experiences that are truly attractive, that could become new games, or different genres,” enthuses Gunnarsson. “They would have some touchpoint to the EVE universe. They could be light footprints, or they could be something very deep.”

CCP are keeping the specifics about what types of apps their designing and for which platforms close to the chest for the time being, assuming they’re far enough in development that there are any specifics — Lander envisions small teams and quick turnaround times prototyping lots of different ideas.

Still, he seemed excited at the prospect. “We have an amazing opportunity to work with a persistent, sandbox world. Oh my God, just imagine some of the best mobile games out there …” he tells me at the reception before trailing off.

Whatever form CCP’s mobile projects take, Lander finished his keynote presentation with a confident pronouncement: “This time next year, you will have EVE Mobile in your hand.”

All the images in this article are from the PC version of EVE Online.