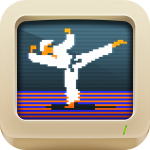 As word of the Karateka remake hit the news towards the end of last year, Mechner began hearing from lots of these gamers expressing a desire to replay the original game on their modern devices. And, so, he teamed up with Olivier Goguel of FTA to bring the original Karateka to iOS (and Android) by way of Goguel’s Apple IIgs emulator, ActiveGS (which we first highlighted back in 2011). 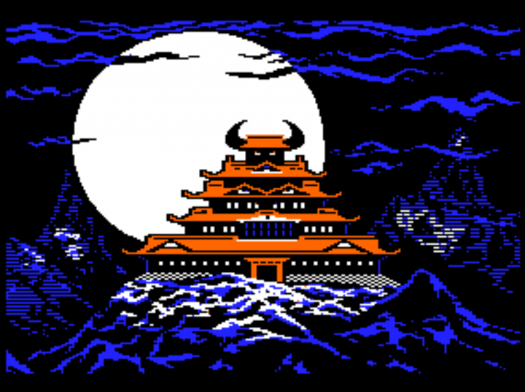 Karateka Classic is the original Apple II Karateka game code — bit for bit — running on your iOS device, with nice retro touches, such as sampled floppy disk noises, optional video scanlines, and the choice of a color CRT or a monochrome display (in amber or green screen). And, the easter-egg is still intact… 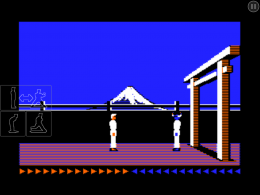 The game of Karateka places you in the shoes of The Hero, and you must fight your way through the throngs of skilled minions loyal to the evil warlord Akuma, who has kidnapped the lovely princess Mariko and imprisoned her within his fortress, high atop a craggy cliff. Your only weapon is your skill at karate, as you attempt to fight your way through ever-more-powerful foes, deep into Akuma’s sanctum, and ultimately facing the warlord himself. It may take many tries before you find victory, but Karateka was designed such that a successful run can be made — by the skilled player — in one sitting, around half an hour. 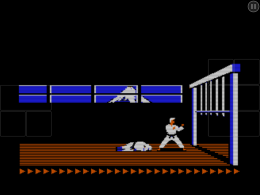 Karateka on the Apple II was played on a two-button, analog joystick. Rather than emulating that outright, Karateka Classic features a set of control icons along the left and right edges of the screen that correspond to key in-game actions — stand, crouch, punch up, punch straight, punch downwards, etc. After playing the game through several times on both the iPhone and iPad, I am very much in favor of the choice that was made here, as compared to the typical virtual stick scenario we’re all familiar with.

Another addition to the game is an earned rewind feature; after reaching a certain point in the game, a swipe to the left will revive the fallen Hero and start things off at the point of the most recent victory. The original Karateka is a one-life affair — when you die, it’s game over. Mechner recently indicated, in discussing the Karateka remake, that he felt he could never really get away with that today. And so, the swipe. Executing the recovery swipe, however, may result in deep feelings of shame…

Karateka Classic brings one of the most notable games of the ’80s to your iPhone or iPad, in pixel-perfect form, with nice retro flourishes. While it’s a no-brainer pick-up for anyone who ever white-knuckled it through the game almost 30 years ago, it may well be worth a look to those unfamiliar, but interested in seeing what all the fuss is about. Mechner’s four-part video series gives insight into both the original title and the 2012 remake, as does our interview with him back in January.

Karateka will be available in just a few short hours at 11:00 PM tonight, so be sure to snag our app if you want a push alert when it hits.