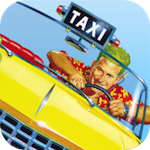 Heads up: SEGA is doing a sale on three of its more notable recent releases on the App Store. From now until later this weekend, you can grab After Burner Climax (Free), Crazy Taxi (Free), and House of the Dead: Overkill (Free) for a couple bucks off their usual listing price. So, if you want to do something with either zombies, taxis, or jets feel free to go nuts.

Here’s one of those handy before and now lists:

Each of these games suffer from some of the usual issues that come from ports of games that were originally on machines with buttons (or steering wheels … or joysticks), but generally speaking, they’ve been received well by folks.