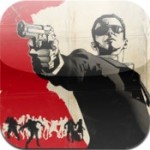 Back in the late ’90s, Sega’s House of the Dead was one of the most popular games in arcades. It let you team up with a buddy, each with brightly-colored plastic guns in your hands, and lay waste to hordes of the undead. How could it not be popular?

While having a stand-up cabinet with physical faux guns attached was a big part of the appeal of a game like House of the Dead, the franchise went on to become quite popular on home consoles, utilizing its own set of gun peripherals or more recently being compatible with motion controllers like the PS3 Move and Nintendo Wiimote.

Tonight Sega is getting ready to drop House of the Dead: Overkill – The Lost Reels on the App Store. It’s a touchscreen-tuned, remixed version of the title released for the Wii back in 2009, and I’ve been playing around with it for most of the morning. To be honest I wasn’t exactly expecting much out of the iOS House of the Dead, but I have been pleasantly surprised so far, save for a few head-scratching quirks. 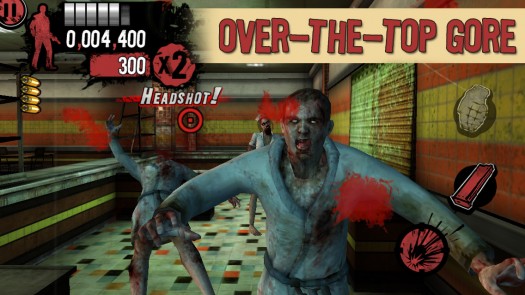 On the bright side each chapter in the game is quite lengthy. You’re guided around “on rails" through each environment, blasting at zombies (oh sorry, I mean the infected) at every turn. There are also a ton of cool little touches to discover, like hidden items or secret doors you can access by shooting them. 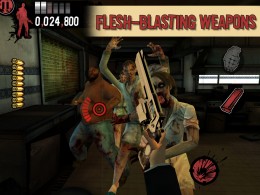 A pretty robust shop system allows you to buy and upgrade new weapons. While you can certainly buy the “Koins" currency as IAP, I found I had more than enough to upgrade my starting shotgun and handgun quite well just using what I earned through playing. Good thing too, as the third segment of the first chapter is where things really started to get tough, and the upgrading instantly made the going a lot easier.

The weapon upgrades are permanent, and there are some abilities you can permanently upgrade for your character too like beefing up your life bar or combo multiplier. The shop also contains consumables which will give you a temporary boost in things like damage done or Koins earned.

One of the biggest head-scratchers so far has to do with the controls. There are options for a virtual stick which moves your aiming reticule around the screen, and it works really well, and then there’s an option for accelerometer controls which aren’t quite as good in my opinion but still seem to get the job done alright. Then there’s a Frenzy Tap option, which sounds like a tap-to-shoot scheme, and also seems like the control option that would make the most sense for this game. 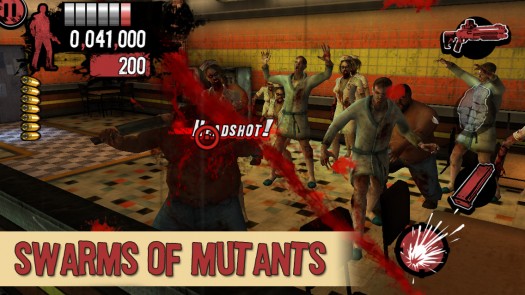 I say “sounds" and “seems" because I haven’t actually tried Frenzy Tap yet. For some inexplicable reason it’s locked, and I haven’t quite figured out how to unlock it. It seems very strange to lock away something like a control option, but I’m getting along just fine with the virtual stick so I guess I’ll just see what happens I do end up running across Frenzy Tap.

Other than the couple of quirks I mentioned, the actual action in House of the Dead is as solid as ever, and I’m having a blast so far. The production values are quite high, and fans of the series should be pretty happy having a version to carry around in their pocket. House of the Dead: Overkill – The Lost Levels should be hitting the US App Store tonight at 11pm EST, so in the meantime hit up our forums for more impressions and feel free to add the game to your Watch List in the TouchArcade app (Free) to be notified when it does land here in the US later tonight.