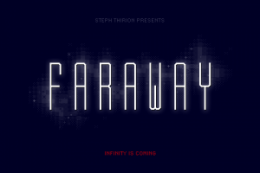 If you get the feeling that you’ve been reading about Steph Thirion’s ‘Faraway’ for years now, you’d actually be totally correct in that notion as we first posted about the game all the way back in 2010 when we first saw it at GDC. In a nutshell, the game as we saw it then involved flying around the universe and hooking on to stars via a familiar gravity mechanic that (most recently) appeared in games like Astro Shark ($0.99) and many others. Faraway’s unique hook is that it combines this style of gameplay with actually drawing star constellations depending on which stars you hook on to.

You can see how this all shakes out in our video from GDC 2010:

We caught up with Thirion a year later at GDC 2011, where we got a look at a slightly more complete version of the game along with the explanation that he had been delayed by other projects that had prevented him from working on Faraway. We shot another video, and it seems the most notable change is tweaked progression to make it easier for players of all skill levels.

The following August we got word that the game was going to be released in the fall of 2011, and there even was a pre-release teaser trailer that hit Vimeo. It’s a good trailer, and we found ourselves justifiably stoked that Faraway was (then) just around the corner.

After that, things went totally dark and updates on the game’s progress were limited to the Faraway thread getting bumped every now and again as someone found a new vague tidbit or just stopped by to ask if anyone knew where the game was.

The most promising sign that the game is still in the works came from The New Yorker of all places, where Rob Dubbin, a writer for The Colbert Report actually managed to get his hands on a copy of the game. The story touches on its epic development cycle, as well as areas of the game that Steph Thirion has reworked after being inspired by recent indie darlings like Journey and Fez.

Overall though, this is just a promising sign that Faraway isn’t a dead project, and that it exists somewhere, and might eventually be released some day. If you’ve been following this title for years now like us, be sure to add it to your TouchArcade App (Free) watch list.