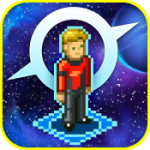 Two years, two Kickstarter campaigns, and lots of hookers and blow later, developer Warballoon has finally beamed up Star Command to the App Store. Do some screws still need tightening? Affirmative. Should you dive in immediately? Absolutely.

After designing and naming your avatar and ship, you learn the ins and outs of running your rig. Your spacecraft is made up of three types of rooms: weaponry, science, and engineering. You decide which types of rooms you want to build, then hire crew and assign them to rooms. Without crew to operate equipment, rooms cannot function. Rooms cost tokens to build, and some rooms, such as the plasma torpedo, require special ammo tokens to operate.

With the basics under your belt, you set sail for faraway planets and mix it up with your first band of hostiles. The goal of ship battles is to knock out the opposing craft’s shields and sap their hull down to zero before they do the same to you. You wait for your weapons and defensive tech to charge up, then let fly with your chosen offense by playing quick time-like minigames such as stopping three spinning balls inside tiny circles and lining up vertical and horizontal sliders. Survive, and you earn tokens you can allocate toward more rooms and upgrades for your crew and equipment. 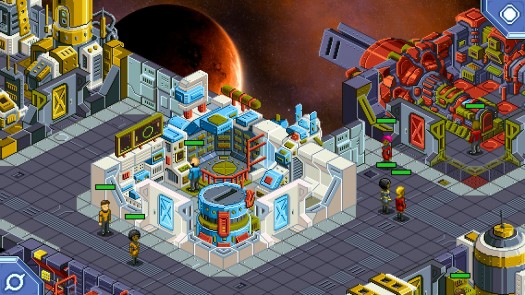 I breezed through the first mission and felt confidence settle in. Three missions later and all hell broke loose. Enemy ships charge their weapons faster than you can power up your defenses, so expect your shields to drop offline seconds into a fight. Once you take enough damage, your hull cracks open, enabling parties of invaders to teleport on board and stalk from room to room. Crew assigned to the bridge carry blasters, so you’ll want to hustle on after them before they cut down your unarmed engineers and scientists. 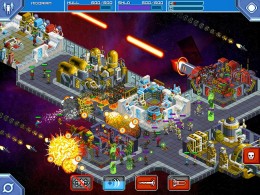 Oh, and when you have a sec, a fire just broke out in the healing bay, the enemy’s last torpedo tore a gash in your hull that sucks out any crew that wanders too close, your plasma torpedo needs to be reloaded, that wailing alarm means you should trigger the dodge doohickey to cancel incoming blasts, restock your ammo tokens or the most devastating cargo your torpedoes will unload is a puff of air, unleash laser blasts and machine gun fire–careful not to blink during the minigame or you’ll have to wait until 30 seconds to try again–and, yikes, a hulking beast of an alien just torched your one and only healer, so you’ll want to reassign another crew to the healing room then hurry them on back to the firefight in the hall. And do make sure not to get yourself killed, won’t you? In Star Command, you don’t go down with the ship. The ship goes down with you.

Star Command is not a strategy game. You don’t win by out-thinking opposing ships. You win by keeping a cool head and squelching problems as they appear. And if you can’t squelch a problem right away, you set it aside and push on until you get a chance to breathe. Your ship will be a charred mess held together with spit and bubblegum by the time the victory message splashes across your screen, but even then, knee-deep in ruin and the bodies of your loyal crewmates, there’s nothing more satisfying than watching your enemy’s vessel explode and fly apart. You won, and in Star Command, winning feels mighty fine indeed. 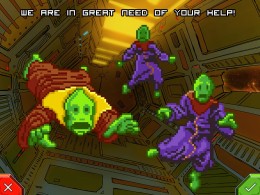 “All misfortune is but a stepping stone to fortune," as Thoreau said, and you’ll agree when you collect your hard-won reward. Sometimes, Star Command feels hard for the wrong reasons. Missions usually deteriorate into you rounding up fighters and healers into a ball of death and rolling through the ship to mop up invaders. It’s a fun incident to juggle when it’s one of many incidents on your plate, but wrapping up every mission in the same way gets old. Stumbling over the touch controls also grows tiresome; you tap to move characters and operate rooms, but tapping the exact crew member, room, or icon you want is tricky when the screen gets crowded.

More seriously, I encountered a game-breaking scenario near the end of the campaign. I had just finished off the enemy ship and whittled the last pack of invaders down to one. That one invader got stuck in a corner of the ship at the end of a narrow corridor. A hull breach stood between my ball o’ death and the invader. The corridor was too narrow for any of my crew to cross over without getting sucked through the gap, leaving me with no other option but to reload a save from two battles prior, the last occasion where the game allowed me to log my progress.

Conceding defeat to the untouchable stowaway soured me, but only temporarily. That’s the sort of AI wrinkle the developers can iron out, and it didn’t stop me from diving right back in. Warballoon’s final product changed in numerous ways over the past two years. Battles play out in real-time instead of over turns, research trees were pruned down to instant upgrades, and…

Well, the change list goes on for days, I’m sure. But the core idea, the thrill of pinning a captain’s badge to your chest and piloting your own ship through the starry depths, remains intact in the form of an addictive and brilliantly chaotic experience.

If you’re still having trouble parting with the three dollar entrance fee, check out our first TA Plays video, our second, more in-depth TA Plays + Hands-on preview, or scope out the discussion in our forums.