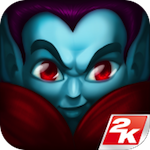 Time warp! Civilization creator Firaxis’s turn-based strategy game, Haunted Hollow ($0.99), is available for download on the App Store. If you didn’t grab it the first or bazillionth time it managed to see a release before yesterday, consider picking it up. It’s a neat, bubbly competitive one-versus-one supernatural slugfest that tasks you with building up an army of monsters and scaring more townsfolk than your opponent. It’s a pretty deep game that really forces you to consider the make-up of your monster army, as well as each move. We wrote about this pretty extensively last week.

If you’re scratching your head still about the release — yes, the game’s “launch" the other week or so ago was the result of “testing error." This version of the game sees a few updates, mainly for polish stuff. Here’s the launch trailer: