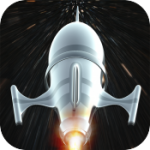 As both a lover of retro 1950s sci-fi design and an enthusiast of gaming history, it was inevitable that Rocket Patrol (Free) would snare my attention in its tractor beam. This recent, iPad-only release by GRL Games is a descendant of the classic card games Touring (1906) and the French-designed Mille Bornes (1954). Those games took two players on a head-to-head, cross-country automobile race, avoiding fender benders and flat tires along the way. Rocket Patrol trades wheels for warp drives, taking that competition into the final frontier.

It’s not a terribly complex game, nor does it claim to be. Games are short, and (aided by a few brief tutorial screens) most new players should have a good grasp of the basics by the end of their first single-player match. Even the game’s subtler strategic possibilities will become clear to attentive players after just a handful of games.

The Rocket Patrol deck is comprised of three basic card types. Numbered light year cards are the fuel that propels your ship forward a set distance, in increments of 5, 15, 25, and 100 light years. Red hazard cards, depicting events such as engine fires and asteroid fields, can be played offensively to stall your opponent. Green repair cards–star maps, space stations, etc.–overcome a specific type of hazard when played, allowing your own stalled ship to resume its course toward victory. 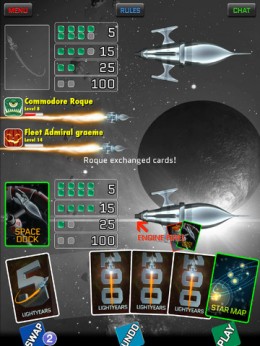 One of my favorite mechanics in Rocket Patrol is a clever twist on the classic formula of the game’s predecessors. Those pitiable, road-tripping terrestrials of yesteryear had to suffer 50 mph speed limits. With the flip of a switch (er, card), today’s interstellar rocketeers can blast into hyperspace. To play a hard-hitting 100 light year card, the game’s highest denomination, you must have previously built up speed by playing a special hyperspace card. You remain in hyperspace indefinitely, and can keep playing 100s on subsequent turns… At least until your opponent (always, ALWAYS at the least opportune moment) yanks you back down to sublight speed with a hazard card, or with a special, hyperspace-countering sublight card. In my matches, this mechanic typically has the most pronounced effect in the endgame. Keeping an opponent out of hyperspace (and, therefore, from playing that last, prized 100 they’ve been hoarding all game) can be an effective way for a trailing player to catch up and offer a last minute threat.

In a further attempt to evolve beyond the classic Mille Bornes formula, this title also mixes in a couple completely original gameplay elements. Unfortunately, these additions end up being something of a mixed bag, arguably doing more harm than good to the game’s balance and longevity.

Instead of simply traveling a certain distance across the galaxy to claim victory, a new “pip" system requires players to play a specific number of each denomination of light year cards. If you’re like me, you might find yourself wishing you could occasionally leave an opponent in the cosmic dust with a lucky run of 100s and hyperspace cards. Or that it might be exciting to just barely beat a floundering opponent with a hand of slow-but-steady 5 light year cards. The pip system takes situational possibilities like these off the table. Instead, games unfold more uniformly as blind luck takes the place of strategy, and the experience occasionally feels like it’s devolved into a game of “cross off the checklist." 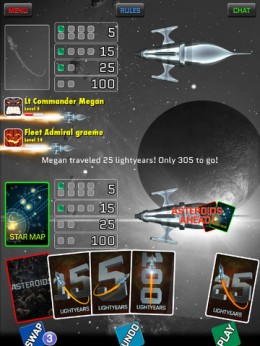 As a whole, the retro sci-fi aesthetic looks good. The card design meshes well with the game’s animated space background, while nearby the players’ rockets race along side-by-side. The interface does feel a bit claustrophobic, though, and there are a few design elements (i.e., uninspired/out-of-place buttons, too many styles of text) that could benefit from a little refinement in future updates.

The game features both single-player and multiplayer modes. At the moment, there is only one level of single-player AI difficulty, which is quite challenging (sometimes frustratingly so). The developer has reportedly already toned down the AI’s skill level since beta, and I suspect fan feedback may lead to further adjustments in this direction. Multiplayer is asynchronous, with matchmaking through Game Center. As you’d probably expect, you can invite a friend to play through the Game Center interface, or auto-match a random player. However, since Rocket Patrol‘s casual, easy-to-learn and quick-to-play nature would be an excellent choice for kid-friendly pick-up games with younger siblings, nephews/nieces, etc., the game would have benefited greatly from some sort of local play capability.

Rocket Patrol‘s in-app purchase structure might be a sticking point for some players. It’s not overly intrusive, and you can enjoy the game indefinitely without spending a dime. However, your willingness to invest in IAP will have a noticeable impact on your games. Unlocking the “full game" for 99¢ adds two new cards to your deck. One of these is the “Trouble Nullifier," an all-in-one repair card that can overcome any offensive card played by your opponent. Traditionally, matching up specific repair cards with individual hazards is an important aspect of gameplay. Normally, to win consistently, you need to maintain a careful balance in your hand, keeping a variety of repair cards on hand to counter the opponent’s various hazards, while not getting so bogged down that you can’t draw the light year cards you need to make forward progress. The cure-all Trouble Nullifier cards, which are quite plentiful, strip away this element of strategy. Once you have access to Trouble Nullifiers, the other repair cards quickly become an undesirable waste of space in your hand.

Veteran developer Graeme Devine has explained that GRL Games is trying to strike a balance with this mechanic; trying to maintain balance with these bonus cards, while still creating a strong motivation for players to upgrade to the full version. I can appreciate that sentiment, but with its current implementation, Trouble Nullifiers certainly do put a huge thumb on the game balance scale. Incidentally, Devine has stated an intention to add more cards in future updates, which would likely be available to everyone who purchases or already owns the full game. Time will tell how these additions will further affect game balance, for better or worse.

The game’s other IAP component revolves around “stars." Stars are the currency of Rocket Patrol, and spending a star during a game lets you discard and replace your entire hand. You earn a slow trickle of them through regular gameplay, and depending on your play style that trickle may be enough to keep you well-stocked. While you could elect to not use stars, avoiding IAP altogether, that won’t stop the single-player AI and multiplayer opponents from using stars to their advantage. With frugality in mind, I’ll find myself spending a star or two during each match, then sometimes going several matches without using any. At this rate, my star count has been very slowly rising.

On the other hand, I’ve read accounts of players regularly using a whopping five or more stars per match. At that rate, your star reserve will very quickly run dry. If you’re a frequent star-spender and feel the need to purchase more, you have three IAP options. You can purchase the currency doubler–increasingly ubiquitous in iOS games–and earn twice as many stars through regular gameplay. You can also purchase stars directly at the rate of 100 stars for 99¢. Finally, if you’re a star-spendaholic and see yourself playing Rocket Patrol for years to come, you could invest a hefty $9.99 for infinite stars, and never again have to worry about the cost of discarding your entire hand.

Rocket Patrol would benefit from additional player customization options in future releases, such as the ability to toggle the pip system on or off, or to restrict the use of bonus cards. But despite my concerns over balance and a couple minor annoyances over IAP, at the end of the day, it’s still a slick-looking little card game that’s easy to learn and fun to play. For more impressions, check out our discussion thread. Rocket Patrol is an unapologetically casual game, and the strategy probably isn’t deep enough to hold an iOS card aficionado’s long-term interest. But it’s worth checking out, and even if you’re among that hardcore audience, it might be a great title to keep tucked away in your iPad library, should you find yourself looking for a game to play with a younger gamer or casual gaming adult.