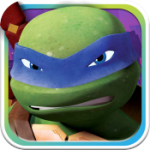 The opening to Teenage Mutant Ninja Turtles: Rooftop Run ($3.99), an endless runner based on Nickelodeon’s reboot of the popular ’90s cartoon, is almost as awesome as the game itself. We open on a shot of our four heroes in a half-shell lounging around the sewer den playing video games. A very young and spunky April O’Neil comes bursting into the room, shouting at the love-struck mutant teenagers to turn on the news, which shows alien invaders descending on New York City.

Boggled at the nerve of the alien riffraff, the heroes rush up to the surface, spout a lot of talk about kicking some alien butt–and immediately set off running when the alien ship swoops in from above and gives chase. My heroes.

Humorous as it may be to see those turtle tough guys turn tail, I’m glad they did, because the resulting adventure makes for one of the more creative runners on the App Store. After choosing a turtle, your hero sets off at a dash, leaving you to tap the screen to leap gaps between buildings and ninja-kick Foot soldiers and aliens in your path. As you run, you’ll need to collect green orbs to keep the glowing meter at the top of the screen from draining. Should it deplete, the ship beams you up and, one presumes, the crew dines on turtle soup. 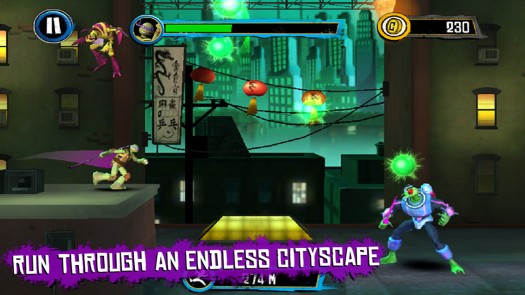 The controls are as responsive as they are intuitive, and that’s good, since flubbed jumps and getting cold-cocked makes you stumble, giving the alien ship time to gain ground. Jump from the lip of a rooftop, however, and you’ll hit the ground running. The same goes for attacking. Tap the screen when your turtle brushes shoulders with a Foot and you’ll perform a strike that clobbers the bad guy and boosts you forward. Spiky traps, pits, and enemy soldiers appear in increasing quantities as you run along. Tap without missing a beat and your chosen turtle will vault smoothly along, providing excellent visual feedback.

Those ooze orbs you gulp down along the way do more than increase your speed. Collecting enough orbs to fill your speed meter triggers Turtle Time, a combat mini-game where you tap the screen to put the hurtin’ on Foot soldiers. The novelty wears off once you realize you’re participating in a glorified quick time event, but it switches up the usual runner formula nicely.

As expertly as plucking all the bells of a target dummy without making a sound, you pick the pocket of every Foot soldier you clobber, earning coins you can use to buy gear, costumes, and weapons. You can also save up thousands upon thousands of coins to unlock extra characters–including the other Ninja Turtles. Yes, after a few rounds running with my homeboy Raphael, I went back to the sewer only to find that Master Splinter had changed the locks. All four turtles are available when the game begins, but the three you left behind cost over 3,000 coins each when you return to the lair. 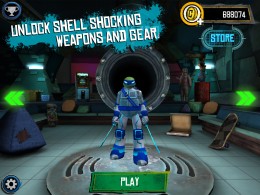 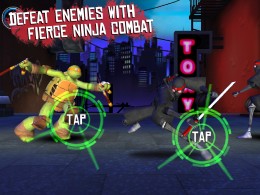 Even my longest runs only netted around 200 coins, but some of the more expert players in our forums are racking up earnings in the thousands of coins, so your mileage may vary. There’s a grind here for sure, but it’s not insurmountable by any means. Completing three Turtle Times in a row opens up a boss fight, and KO’ing these heavy hitters earns you tons of coins, but decking out a single turtle with tricked-out gear such as slower energy loss and cyber weapons requires a hefty time investment.

Offering all four Hero Turtles (I just dropped a culture bomb) only to lock away three of them when your back’s turned is irritating, but far from a deal breaker. TMNT Rooftop Run makes for a rollicking good time, especially if you enjoy runners but crave a recipe with some spice.