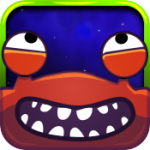 If your haven’t seen Crabitron ($2.99) in action, you owe it to yourself to check out this TA Plays. Two Lives Left’s Crabitron is fast, funny, endless but kept remarkably fresh with boss fights and classic game parodies, and has spot-on controls that make it one of the most iPad-native games I’ve played.

In hindsight, a game that takes advantage of the multi-touch screen by asking you to use your fingertips like chopsticks makes perfect sense, and the kaiju (giant monster) theme really suits that mechanic. If the original Rampage captured something about the potential (and limitations) of the arcade technology of it’s day, Crabitron does the same thing for the iPad, very much including the Mini. 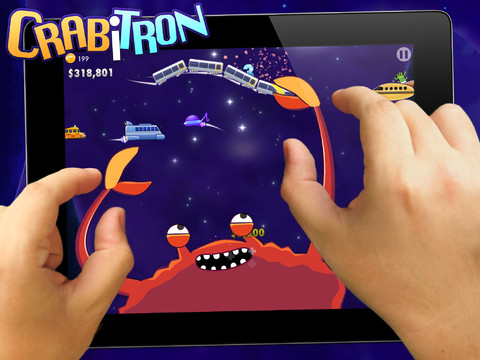 Most of the games that offer single-device multiplayer on the iPad are turn based. There are a few with simultaneous competitive play, like Shufflepuck Cantina (Free) and the HD version of Fruit Ninja ($1.99), but only where the controls can be kept to separate parts of the screen, to avoid input confusion.

By default, one of the challenges of playing Crabitron is trying to use both claws effectively at the same time. It’s hard to do anything fancier than having one claw mirror the other. But share your tablet with a friend, and the challenges change. Now you can each focus on your own claw, but you have to worry about what that other claw is doing. This can lead to almost Spaceteam (Free) levels of confused shouting. Even the fact that the claws can get tangled due to input confusion if they’re pressed together feels more like a feature than a flaw. 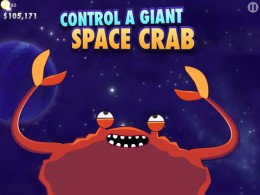 Perhaps best of all, players of widely varying skill can play together. This is the only videogame I’ve found that I can play with my toddler without one of us quickly getting frustrated or bored. It’s amazing, really. So far, my high score for the game is from a run I started with him, played a little by myself, continued with my spouse, and then finished alone.

The biggest problem with Crabitron’s co-op potential is that it doesn’t mesh well with the game’s coin-based upgrade system. You can upgrade each arm separately, but upgrades are costly, permanent, and irreversible. Thankfully, there’s no IAP grubbing: you can buy a coin doubler or a tripler, that’s it.

It feels like he devs were preparing for the possibility of needing to release Crabitron as a freemium game, but took the risk of charging Happy Meal prices instead, something they deserve credit for.

Regardless, it would be a lot more fun (especially in co-op mode) if you could choose different claws or abilities for each game. Fixed-upgrade systems, with their roots in RPG character customization, tend to feel really player-specific.

To be fair, I don’t think I’m playing Crabitron “as intended," it just happens to be a heck of a lot of fun this way, a bit like the tricycle that became cooler when you figured out you could ride it backwards downhill. Just don’t hold Two Lives Left responsible if you injure yourself. Whether or not you’ve got a friend (or toddler) to play Crabitron with in this unintentional co-op mode, you really need to check the game out as Crabitron is a perfect example of how to intelligently craft a game for the iPad that really could only exist on the iPad.