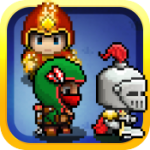 Pocket Frogs (Free), Tiny Tower (Free), Pocket Planes (Free)… Nimblebit’s gotten pretty good at keeping us enraptured on our devices with cute graphics and pixelated timers. With Nimble Quest (Free), the team takes a turn towards improving upon and deepening a classic arcade experience. Less of a time-management title and more of an action-oriented experience Nimble Quest is an excellent title that continues the trend of high quality games coming out of Nimblebit.

The best way to describe Nimble Quest is like a game of Snake, except way better (to paraphrase the title of our TA Plays). Similar to what Call of Snakes ($0.99) did last year, Nimble Quest takes the simplicity of Snake’s mechanics and adds layers of variety to turn it into something more. The game centers around guiding a group of heroes around a bordered plane with simple swiping controls turning your heroes left or right. Movement and attacks are both on auto-pilot and the goal is to dispatch enemies that randomly appear in the environment. Take out a certain number of baddies, and you move on to the next level. 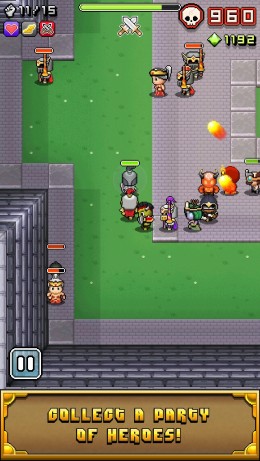 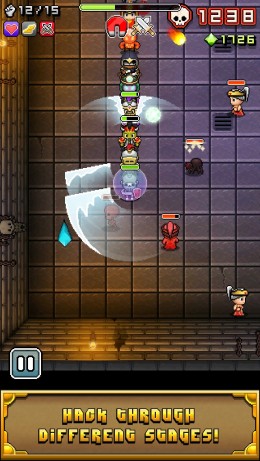 Players initially choose one hero and ‘recruit’ others while playing, with each new hero following the others in a line. As more heroes are recruited, the gameplay shifts from simply taking out enemies to also planning ahead to direct the movements of your heroic conga line. Each hero in your line auto-attacks when in range, boosting your party’s damage with more characters you have in your party. Heroes are defeated if an enemy comes into contact with them and the game ends if your lead hero is dispatched. Initially, players have a limited number of heroes to play with but more are unlocked the further you progress.

I’m a huge fan of Nimble Quest’s gameplay and I think Nimblebit has done an excellent job balancing the game between free-to-play mechanics and just good ol’ fun. The game’s dual-currency system offers enough rewards during normal play while the premium currency is used solely for temporary power-ups and guild battle entries. Sure, the system rewards folks that shell out for premium currency with a greater chance of getting further in a run, but it’s not guaranteed and nowhere near as blatant as other ‘pay-to-win’ schemes that I’ve seen. 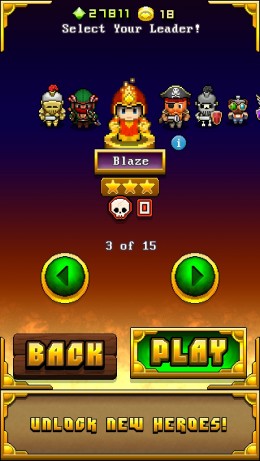 While the crux of Nimble Quest is simple, its diverse cast of characters, RPG-esque leveling system, and social guild elements provide the game with depth and replayability. Heroes in Nimble Quest are more than just simple changes in sprite artwork: each has its own different stats which include armor, attack damage and attack speeds. Even the methods of attack vary, with heroes divided generally into ranged and close-quarter styles with each having nuanced styles within their discipline (such as long-ranged vs AoE or wide-arced vs straight charging attacks). All this leads to a lot of choice for players in finding the characters that suit their play style the best.

The game’s leveling system, meanwhile, encourages players to go beyond character preferences and give each hero a try. Taking out enemies rewards experience for your lead character which is tracked across all runs and counts toward permanent level-ups (and corresponding stat increases). Just as each hero has different stats, the level bonuses are also unique. Most importantly, stat bonuses apply regardless if the hero is your lead, encouraging you to upgrade all characters as each level-up is a boon to your overall party strength.

Nimble Quest’s guild system is reminiscent of the system put in place for Pocket Planes but has been fleshed out with more interactivity and meaning. Every couple of days, the game doles out a guild challenge which pits you against a specific group of enemies (and sometimes even specifies for the character you use as well). Just as with normal runs, the goal is to build your party and take out as many enemies before dying but this time you’re playing for more than just experience or high score prowess.

Each kill counts towards your guild’s kill tracker, which is used to determine overall guild position. Meanwhile, your personal score is used to determine your ranking within the guild which is important since guild challenge rewards are based not only on guild position but also your personal position within the guild. It’s an excellent system that I think does a great job encouraging guild play for multiple reasons while still maintaining a decent reward system.

When you take the sum of all the great things that Nimble Quest does, you end up with an excellent casual title that’s easily approachable while having just enough strategy elements to want to keep you coming back to beat your high score one more time. The quick-play aspect also makes it my go-to title when I have a few minutes to spare. The melding of social elements, long-term goals, and varied (and cute!) heroes just works. I can’t say I’m surprised as to the quality of Nimble Quest, but anyone that hasn’t checked out this gem really needs to download it now.