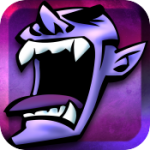 While we’re checking out the onslaught of scheduled weekly releases which will be hitting later tonight, there’s actually a new game which you can play right now which dropped ahead of the pack. It’s called Fangz ($2.99) from two-man developer Game Whizzes, and it’s a weapons-based beat ’em up that features vampires. Nice to see something other than zombies, you know?

If you’ve played something like Zombieville 2 ($0.99) then you should feel pretty comfortable jumping into Fangz. You make your way through levels left to right, fighting back hordes of attacking vampires with various weapons at your disposal like shotguns, machine guns, a flamethrower and more. The levels are timed too, so there’s a sense of urgency to get to the end without too much dilly-dallying.

Where I think Fangz really sets itself apart from similar titles is in sheer production value. The art style and animation makes it feel like you’re playing a cartoon, little specks of humor are peppered all over, and the controls are top-notch. You can tell the developers spent time making sure the game felt just right, and it shows.

Giving the game some legs is an upgrade system that sees you leveling up and improving your character’s attributes as you progress, as well as unlocking new weapons and skills. Sounds like the kind of system rife for IAP, right? Well, wrong. There is none at all in Fangz, so if you’re amongst the crowd that dislikes games with IAP, feel confident in picking this one up.

One other thing worth noting is that Fangz comes in two different flavors: a standard and an HD. The regular Fangz is a smaller size but doesn’t contain Retina level assets for iPads and contains compressed audio. Fangz HD however spares no expense when it comes to space, and includes full resolution iPad assets and uncompressed audio. They’re both the same price, but the regular version is about 100mb whereas the HD is just over 500mb, so it really comes down to if you can spare the space for the extra fidelity.

With either version, though, you’ll be getting a fun and bloody romp that’s been a blast so far in my short time playing. The players in our forums are absolutely loving Fangz so far, so if it sounds like you’re kind of thing don’t be afraid to sink your teeth into this latest brawler.