Of course it wouldn’t be a Wednesday without a Chillingo game, and tonight’s title seems to be R.I.P. Rally, a rare free to play game in Chillingo’s typically fairly “premium" lineup. I dig the premise of the game, which is laid out in an entirely text-less comic book page showing your car (with a giant gun mounted on top) being heli-dropped into a massive arena of zombies. I think the easiest way to describe R.I.P. Ralley is to take the vibe of those arena levels in Twisted Metal, throw in a dash of Smash TV, replace all enemies with zombies, then apply a heavy glaze of free to play on top.

The gameplay loop seems to revolve around fighting wave after wave of zombies, earning coins, upgrading your car, getting slightly stronger, fighting slightly stronger enemies, and repeating this process. The vehicular-based combat is actually quite a bit of fun, as just being able to run over massive groups of zombies always feels satisfying. One thing that immediately jumps out at you is how (comparatively) poorly the zombies themselves are animated, and I’m wondering whether or not that was a conscious decision to simplify the zombies to allow way more of them to be on screen without any kind of performance drop or not- As even on my iPad mini, the game runs great with loads of undead lumbering around. 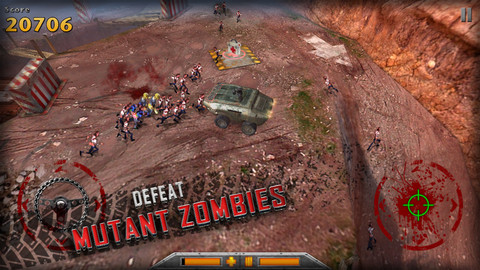 I liked the game a lot until I started delving in to the upgrade system, at which point the freemium elements begin to rear their ugly heads in a big way. R.I.P. Rally features the whole kit and kaboodle of free to play trimmings between ads (which you can disable for 99¢) and two different currencies (one you can buy). There’s even super-gross Burstly referral deals where you can do things like sign up for a Discover card or complete a survey to qualify for a free glucose meter from Alliance Healthcare Services for a small stipend of in-game coins. Being pushed into trading a Blockbuster membership for a bumper upgrade really makes me sigh and say, “I wish I could’ve just paid $2.99 for this game."

R.I.P. Rally should be available on the US App Store at 11:00 PM Eastern, or potentially much earlier if you’re in a region east of the USA. To be alerted when the game is available, open this story in the TouchArcade App (Free) and add it to your watch list. A little after 11:00 PM tonight you’ll get a push alert with the download link.