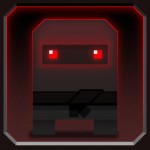 My vote for weirdest game that’s coming tonight goes to Jared Bailey and his newest release Fist Face Fight. I mean, to my knowledge there aren’t any other games that let you play as a giant ninja fist with legs who must use their fist-shaped body to fight off various brightly colored enemy ninjas who are all hellbent on breaking your heart. Yeah, it’s strange alright, and it’s also deceptively fun.

Like his previous games Cubed Rally Racer (Free) and Cubed Rally Redline (Free), Fist Face Fight is a throwback to the old-school of gaming and keeps the mechanics and visuals fairly simple, but has that certain something that drives you to keep coming back and giving it just one more go.

While guarding your heart in the lower center of the screen, you simply need to tap in front of where the enemy ninjas are approaching from to position your fist-y self and fight them off, sort of like stopping missiles in Missile Command.

It’s stupidly simple to play, but as you progress in levels things get hectic and much more challenging, also due to the increasing difficult of new enemy ninja types. The difficulty levels are cleverly split into the different kinds of belts you probably earned in karate class as a kid, so starting off with white, then on to yellow, orange and so on.

Fist Face Fight might not be the most robust title ever made, but it’s a cool little arcade game that is surprisingly engaging despite its simplicity. Oh, and the chiptune-y music kicks ass too. It’s free, so don’t be afraid to give it a look when it drops later tonight.

Fist Face Fight should be available on the US App Store at 11:00 PM Eastern, or potentially much earlier if you’re in a region east of the USA. To be alerted when the game is available, open this story in the TouchArcade App (Free) and add it to your watch list. A little after 11:00 PM tonight you’ll get a push alert with the download link.