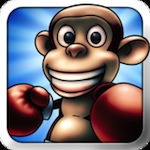 Crescent Moon Games’s big hitter this week is Monkey Boxing, a game about monkeys that can — wait for it — box like humans do. With gloves. And in a ring. In clothing. It’s sort of weird at first or, really, even thirteenth glance.

With two button controls, you’re tasked with beating the crap out of opposing monkey boxers. One button is just a simple punch command, the other a block. When you land a bunch of punches, they automatically string together into combos. But when you time a block just right, you break these combos and leave a big enough opening to start back into your own in kind. You’d figure this would be overly simplistic, even for a boxing game starring monkeys, but the timing component kinda makes it. Matches have a pleasant push-and-pull feel to them, as you and your opponent take turns drilling each other and countering. Also, ultimately the person with the best rhythm and timing wins the match.

The single-player component has some neat RPG-ish that allow you to put new eye ware and trunks on your monkeys as you progress through the campaign’s ladder. You can also train up your monkey between matches, leveling his strength, endurance, and speed.

If you’re feeling froggy, you can take your monkey and use him against a friend via the game’s same device multiplayer. On iPhone, the need for the UI elements and two monkeys on-screen make this a little too hard to play comfortably with someone else, but on a big old iPad this mode of play feels just fine.

Monkey Boxing is certainly slick little arcade game, maybe perfect for those who don’t want the complexity of a Punch-Out but wouldn’t mind punching something every now and then. It’s kind of a no-frills title, which isn’t necessarily a bad thing. Look for it tonight when it hits.

Monkey boxing should be available on the US App Store at 11:00 PM Eastern, or potentially much earlier if you’re in a region east of the USA. To be alerted when the game is available, open this story in the TouchArcade App (Free) and add it to your watch list. A little after 11:00 PM tonight you’ll get a push alert with the download link.