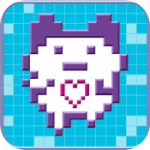 Apparently it’s the 16 year anniversary of the Tamagotchi, the tiny egg-shaped virtual pet keychain toys that either engrossed or annoyed practically everybody in the late ’90s and early 2000s, and to celebrate NamcoBandai has released an official virtual iOS version of the virtual pet, which is almost too much virtual for me to handle. There is an Xzibit joke in here somewhere I’m sure.

As you can see, Tamagotchi L.i.f.e. (Free) is an actual digital recreation of the toy, virtual plastic egg and all. It has the same simple LCD display graphical style as the original toys, and you interact with your pet using three virtual buttons on the egg in a similar way to the toys too. It’s quite the nostalgia scratcher, for sure.

However, there’s also a more modernized view of your pet which you can switch to on the fly. It’s more zoomed in, features some basic color for you pet, and also includes a pretty cool rock-paper-scissors mini-game you can play against your little guy or gal. Check out the contrast between the two styles in the screens below. It’s pretty cool. 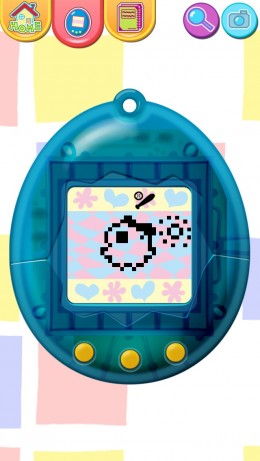 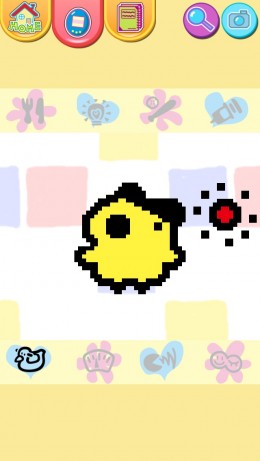 Tamagotchi L.i.f.e. also includes a bunch of neat fan service, like additional egg styles and LCD backgrounds to unlock and use to give your pet a personal touch, and the original batch of different pets to raise. Seeing as we all pretty much carry our smartphones around with us at all times, having a little Tamagotchi living in there seems to make perfect sense and is within the spirit of the original keychain toys.

The virtual recreation goes beyond that, though, as just like the original toys used to incessantly alert you when your virtual pet needed some kind of attention, much to the annoyance of teachers and parents everywhere, Tamagotchi L.i.f.e. delivers this same functionality in the form of push notifications. Except it feels like it’s ten times worse.

I don’t recall exactly how often the toys would bother you with alerts, but the iOS version sends a push notification about every 2-3 minutes, regardless of if your pet actually urgently needs something or not. It’s mostly just your pet “calling you!" to say hello, or something. Either way, with each subsequent push notification my desire to let my pet just starve to death slowly increases. Yeah, that was pretty messed up, and I feel bad for saying it. Here’s two different examples of Tamagotchi L.i.f.e. taking over the lockscreen in a matter of minutes. 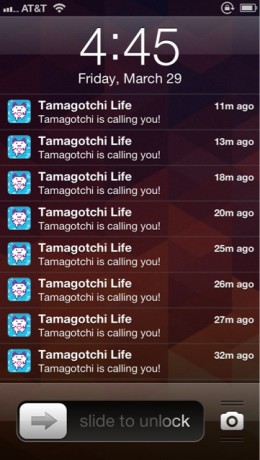 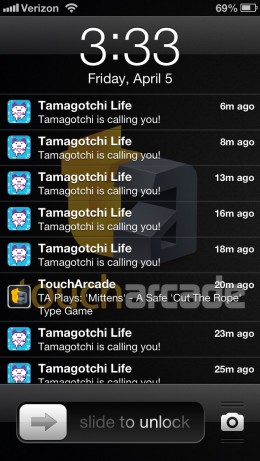 Is my Tamagotchi trying to get my attention? I’m finding it difficult to tell. In all seriousness, though, I’m not sure if the charms of Tamagotchi L.i.f.e. are enough to overcome my intense hatred of push notification spam. Of course you can toggle them off, but if you forget about your pet for long enough and harm befalls them that’s not exactly an ideal scenario either. Ideally I’d like to be able to toggle push notifications just for urgent things, and leave the rest of the responsibility of hanging out with and caring for my pet to myself.

Anyway, annoying notifications aside, the Tamagotchi L.i.f.e. app is actually quite well done, and is a cool gift for fans of the original toys. It’s also free and ad-supported, so you can try it out risk-free, and if you want you can drop a buck to permanently disable the ads. Also, in a game that seems rife for IAP abuse (“Please pay 1 Tamagotchi Bux™ to feed your pet!"), it’s refreshing that the ad-disabling IAP is the only thing you can buy.

Hopefully NamcoBandai can tweak the push notifications, but as it is if you’re hankering for some virtual pet nostalgia checking out Tamagotchi L.i.f.e. for free is recommended.