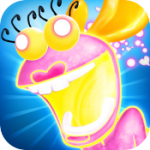 Remember when the word “port" conjured up terrifying visions of developers taking your favorite arcade game and cramming them into cartridges that spat out blurry graphics and fuzzy sound? Twisted Pixel does, and they know it wouldn’t be proper to make gamers revisit those dark days, so they put forth a solid effort teaching their Xbox Live platformer, Ms. Splosion Man ($2.99), how to speak mobile. Solid, indeed, except for a bothersome implementation of an IAP pay wall.

Unlike ports of 3D games that require more virtual buttons than you have fingers, Ms. Splosion Man keeps things nice and simple. You’ve got a slider to move around and an invisible “splode" button anywhere your right thumb pleases. You can enable a virtual stick, but as you only need to prance left and right, the slider feels better and more responsive. Exploding pops you into the air. Press it twice and you’ll do the Ms. Splosion Man equivalent of a double jump. 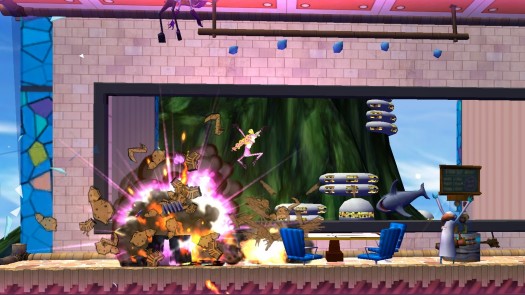 The controls are as tight as they are simple, providing the responsiveness platformers demand. Twisted Pixel also took some clever shortcuts to boil the controls down even further, such as not requiring you to hold the direction you want to jump when wall-jumping. Just throw yourself against the wall, ‘splode, and Ms. Splosion Man will do the rest.

Most levels present a nice mix of platforming and puzzle solving. You’ll hop over pits and enemies, whom you can take out by exploding next to them, and eventually arrive at a Rube Goldberg-like set-up that requires quick thinking and quicker reflexes to pass. On one occasion I came up to a wheel that moved a floating wall back and forth near my position. Positioning the wall to my left and bounding off of it flipped a switch that popped a canister up from the floor that immediately began to descend, like the bell in a strongman contest.

The trick was to detonate Ms. Splosion Man just as she and the canister crossed paths in midair, propelling me over a laser beam and straight off to the next stretch of level. It took a few tries to figure out, but nailing the trick was satisfying. There are also challenges such as finishing a level while spending as little time on the ground as possible. It’s a tricky feat, but pulling it off will leave you feeling accomplished. 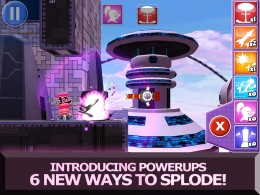 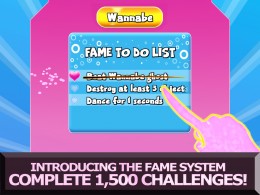 A little trial and error is expected in platformers, but a combination of few-and-far-between checkpoints and some technical gaffes caused some frustration. Many sections auto-scroll, forcing you to spot certain objects such as switches and take action without pausing to think. That’s fine too, for the most part. Switching your brain to autopilot and letting your fingers do the thinking is exhilarating and a big part of what makes platformers fun.

Except many times your smarty-pants do exactly what you needed them to do, but the game didn’t register your ‘splosion even though you clearly overlapped the trigger, or the screen zoomed out so far you couldn’t separate one jumble of pixels and polys from another, or distractions such as a scientist thudding against your screen or Ms. Splosion Man’s fiery combustions blocked your view and made you bungle a jump.

I can overlook those stumbles; they occur infrequently and pale when faced with such beautiful graphics–on par with the Xbox 360 version of the game–and clever level design. The real strike against Ms. Splosion Man is a nasty IAP barrier. Beginning with level 1-4, you have to pay coins you earn in-game to unlock levels. You can unlock levels individually, or unlock each world over two payments, but pay you must. And of course, should you come up a few coins short, you can always fork over real money for coin packs.

Ms. Splosion Man is not a pay-to-play game. That term gets thrown around too casually. But the line between grinding levels to earn coins or taking the easy way out and buying IAP feels like obvious attempt to herd players to the App Store. Earning coins that I can cash in for optional power-ups, I don’t mind. That’s pretty much a given where mobile platformers are concerned.

But even more a given is the expectation that beating one level in a platformer will open up the next one. Purchasing the rest of the game won’t cost you much more than the game’s base price on its native platform, but finding out that the $3 price tag opens up what amounts to a demo unexpectedly soured the experience for me. Still, if platforming is your bag, don’t let grinding or opening your wallet keep you from missing out on Ms. Splosion Man‘s gorgeous, fast-paced, and rewarding adventure.