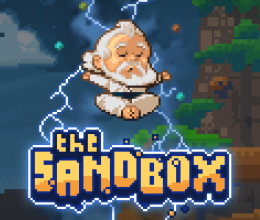 When we originally reviewed The Sandbox (Free) from Pixowl Games, we thought it was a pretty cool… thing. It wasn’t exactly a non-game, as there were structured missions to complete and gaming elements, but they served as more of a tutorial for the broader aim of The Sandbox: to be a creation tool to do just about anything you could think of.

It was a really impressive piece of software, but we felt like it hadn’t really reached its potential at that time due to some limitations in terms of content, a slightly stingy freemium model, and a few technical issues. Despite some of these small problems we still really enjoyed the game.

Well, that was almost a year ago, and The Sandbox has come a long way since then. With roughly 7 fairly substantial updates over the past year, most of our original issues with The Sandbox have been addressed, while simultaneously adding a ton of cool new features to the game. This includes tons of new elements and backgrounds, new missions, explosives, dinosaurs, new campaigns, and more. Not to mention Universal iPad support, Retina visuals, and iPhone 5 widescreen support.

So The Sandbox has really come into its own over the year it’s been out, and users have populated the game with hundreds of user-created levels that really test the boundaries of what’s possible with the game. Some of the user levels I’ve seen have been downright ingenious. At GDC this week, we got a taste of what’s next for The Sandbox with the next couple of updates. Check out the hands-on video to see what’s in store.

The Laser & Pipes update is slated for mid-April and will add a new 10 level campaign as well as the new laser and pipe technological elements. There will also be a new set of musical elements, and some of the user levels I’ve seen that create music are really incredible. In mid-May we’ll see the Humans vs. Zombies update arrive, including a 15 level campaign, a Zombie job powder, and a search functionality for the online gallery.

Keep an eye out for these updates and more coming to The Sandbox during the course of the year.