Usually when we call a game a sandbox, we’re referring to some kind of open world game where you can wander, free of restraints, and do anything you can think of. The Sandbox (Free) isn’t quite that kind of game. Instead it straddles the border between game and art project, rewarding players for creativity while giving them near-infinite possibilities.

You don’t play a character in The Sandbox, you play a god. You can paint with pixels of stone, draw towers of earth and set them to grow. You can draw just about any non-living thing you can imagine, paint it into a scene, and then bring it to life with the forces at your command. You have electricity at your fingertips, steam and oil in your grasp, and much more. It’s less a sandbox than a blank canvas, waiting to be filled.

There are two ways to play (with) The Sandbox: Free Mode and Story Mode. Story Mode is misnamed; there is no story, just a complex, goal-driven training ground. The game walks you through each element so you can learn how it interacts with the others, teaching you tricks like how to use heat and electricity to boil water, or how to grow a forest using soil, seeds and rain. 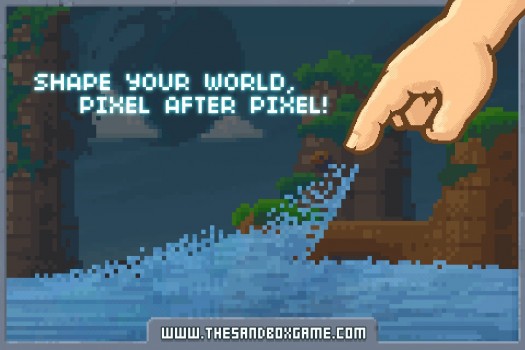 A disproportionate amount of Story Mode is spent on working out the finer details of the freemium model, unfortunately. The elements can be unlocked via IAP or mana earned in game, but the latter option is complicated. The Sandbox doesn’t give out enough mana in Story Mode to unlock the elements when you need them, but if you switch over to Free Mode and earn some achievements you’ll be awarded more. It seems like it might be possible to unlock all the elements for free with enough careful planning and time. Otherwise you can purchase mana, or a launch pack with everything for $6.99. It’s an unnecessarily complicated system that draws attention to the man behind the curtain when you should be focused on learning the ropes.

However you do it, once you work through all 24 Story Mode levels you’ll have the full stable of elements and climate options at your command. That’s when things get really fun, when you move into Free Mode and start creating. You can essentially paint any sort of pixel environment you want, with a huge selection of unlockable backdrops and the freedom to combine elements to do just about anything. Players are only just starting to explore the potential of the game—if you want to be inspired you can paw through the gallery of shared worlds and play with any that you like.

All this freedom comes at a cost, though. The game has a few bugs, like level conditions that trigger incorrectly and Game Center achievements that don’t seem to work. But the part that counts, the ways the elements interact with one another, that part works beautifully. The elements may not always have the properties you might expect, but they can do quite a lot. It would be a dream come true to play a game with this complexity in worlds like those of Minecraft, where you could work some serious feats of 3D engineering.

The Sandbox isn’t that kind of sandbox, sadly, but it’s still fun to play in just two dimensions. Build a world, populate it with flowers and trees, then burn it to the ground. Experiment with the debilitating effects of acid rain. Or build complex Rube Goldberg machines that really work. The sky isn’t quite the limit, but The Sandbox is well on the way. And with a planned Universal update in the works, its canvas is set to grow. So go, make something amazing—then stop by our discussion thread to share your creation with the world.