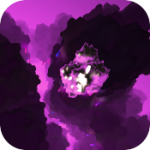 In my fourth year of university, I took a class called Canadian Experimental Shorts. I wasn’t optimistic going in (I mean, that title alone puts you to sleep, right?). On my first day, however, instead of handing out notes or instructions, the professor dimmed the lights and showed us something I had never seen before: a film without cameras. Barely longer than two minutes, it was animated entirely onto physical film strip, and packed with color that danced, twinkled, and exploded to the sound of classic jazz. Its name was Cameras Take Five, and it sold me on Canadian Experimental Shorts. Good news if you’re looking for something completely original: Melodive (Free) is basically Cameras Take Five: The Game.

Fair warning: like experimental film, this one isn’t the most approachable at first blush. Before embracing the game’s persistent feeling of being lost, I felt…well…completely lost. Unable to understand the controls, not quite sure what shapes I was looking at, and disturbingly confused as to which way was up. Fascinated by the ambient noises and sea of floating jewels, I decided to re-read the instructions section and give it another go. And another. And then another. And while I can’t say I ever fully came to terms with which way was up, it ultimately didn’t matter soon enough. 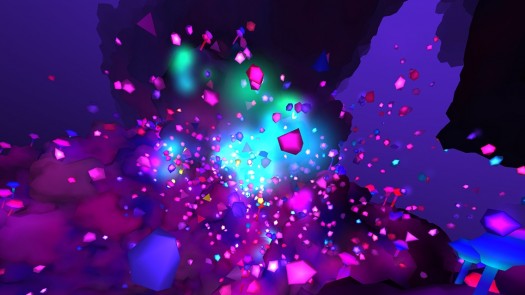 Mechanically, Melodive can best be described as an endless rhythm flight simulator. Immediately after tapping the “Start" button, the Lite-Brite-style home screen disperses to become part of the round, and you find yourself falling downwards (or upwards?) against a black expanse. By tilting your device up and down, you can pitch forwards and backwards to orient yourself, while rotating to the left and right helps spin you into a new position.

Soon enough, you’ll spot hundreds of luminescent chunks of “Melodium" winding intently through suspended rock formations, as if caught in their own gravitational fields. By tapping on the screen, you can boost forwards to collect the precious gems, each one emitting instrumental sounds to form an eclectic, spontaneous backbeat. The further you drop, the faster things get, and it’s only a matter of collisions before the music and the world it’s apart of implode back into the opening menu. 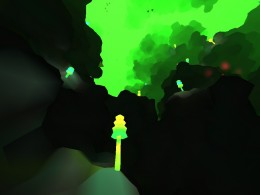 If the controls sound completely bizarre, that’s only because they are. Melodive is the kind of game you never really get the hang of, even once you’ve gotten the hang of it, if that makes sense. Combined with the downward physics, the odd mixture of tilt and rotation makes you feel like you’re always fighting to steady yourself against an inevitable tumble into the abyss. Yet that’s part of what makes the game so compelling. Instead of existing to be mastered, the controls are seemingly designed to be coped with; to exploit the comfort zone of phone and tablet games and always keep you resting just outside of it. The end result is a genuine sense of surreal, dreamlike falling that feels more and more freeing as time goes on.

What really sells the out-of-body experience of Melodive is the highly original visual landscape, and the concept that goes along with it. As you move through fields of music-making Melodium, you craft an ebbing and flowing soundtrack filled with everything from pan flutes, to drums, to the prominent twang of sitars. Each color represents a different instrument, there’s a wonderful synesthesia to the whole thing; the bass-heavy amazonian beats sound like the green and blue orbs that create theme, while the whimsical, jazzy trio of red, purple, and white feel right at home with their hues. Meanwhile, silver chunks of suspended Melodium change the landscape mid-stream, keeping gameplay tricky while creating a perfect tone of exploring the unknown. Melodive takes what could have been repetitious high-score chasing and packs it with creative energy.

In the same way Electroplankton offered the DS a totally unique game-like way to relax, create, and experiment with music, Melodive is a must-have when you want to mellow out, or tickle your brain. Obtuse explanation and an avantage garde approach to controls make this a risky buy for anyone looking for something dependable, but 11 pages of engaging discussion in our forums say it all: you certainly haven’t seen anything like this before. And in today’s risk-averse App Store landscape, that’s worth a lot.