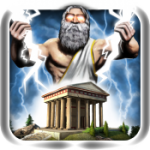 There are a lot of themes that have been overdone in iOS — zombies and retro-themed visuals, to name a few. However, one area that hasn’t been fully explored is Greek mythology. Chillingo’s Fury of the Gods (Free) looks to address that by combining well-known ancient mythology thematics with interactive tower-defense gameplay. While Fury’s difficulty curve seems to lend itself a bit too much towards IAP, the core game is enjoyable and adds some nice touches to the traditional tower defense genre.

Putting you in the role of three ancient gods, Fury tells the tale of the human race rebelling against their former saviors. As mankind rises up and attempts to attack the gods, you’ll utilize various powers and mythological creatures to repel the attacks and put humanity back in its place. Narratively, Fury sounds very much like a certain blockbuster movie series. However, originality aside, I still enjoyed the overall theme. The same goes for the visuals, which do a great job utilizing the Unreal engine to create some decent mythological environments. I only wish the game had more than just three locales, as each one looks great. 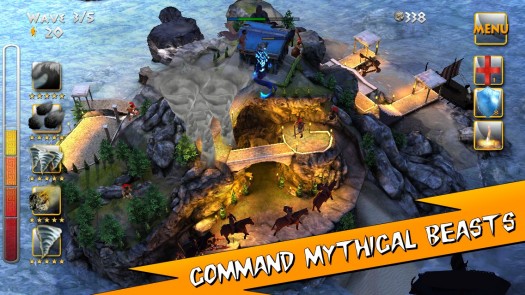 As a tower defense game, Fury incorporates a lot of familiar defense elements with a few twists that aren’t traditionally found. For example, each of the three environments are 3D in nature, meaning you’ll have to zoom in and rotate the environments in order to keep track of all the potential routes (and enemies). In this regard, Fury plays a bit like Ngmoco’s classic Star Defense title. It’s a small change, but I wish more defense titles employed similar techniques.

Another twist is Fury‘s emphasis on power-ups and direct damage dealing vice traditional tower placement. Players can tap directly on enemies to deal damage, and a variety of power-ups (fueled by an ever-replenishing energy meter) can be unleashed to deal serious harm to the opposition. Sure, players can still deploy mythological creatures that act like traditional towers, but I found the majority of my time focused on tap-damage and launching elemental powers. A decent upgrade system rounds out the list of features, allowing players to upgrade every power, unit, and even the temple itself.

You’re going to need all these upgrades and power-ups too, as Fury‘s difficulty ramps up pretty quickly after a short introductory period. Later levels force players to really multitask damage dealing across all paths, forcing careful simultaneous consideration of  launching power-ups, simply tapping out enemies, and utilizing tower units to to keep tabs on the routes you aren’t focusing on. The later missions are tough and there’s typically a very short window of error before you find your temple overrun by mobs. While this may be frustrating for novices, I find it rather refreshing, to a certain extent.

Unfortunately, Fury‘s difficulty seems to inevitably ramp up to intolerable levels based on standard playthrough. That’s where the game’s IAP comes in. Players can purchase gold on the side via IAP to easily upgrade power-ups and units. The option to purchase powerful consumables that can quickly turn the tide in a single mission is also available. While initially passing missions earns a decent amount of coins, replaying already completed missions doesn’t yield much currency. Meanwhile, the powerful consumables  aren’t really seen outside of shelling out real cash for them. Eventually you get to a point where you either need to excessively grind or shell out IAP to get the coins needed to upgrade your power-ups (and thus pass the more difficult missions) — not the best of choices for tower defense.

Still, despite the difficulty (and IAP) woes, Fury of the Gods is a great addition to the iOS tower defense collection. Its well-done visuals, ‘interactive’ tower-defense gameplay and added layers of strategy via its 3D environments are welcome changes to the traditional tower defense formula. Assuming you can handle the grind associated with its difficulty, by all means check out Fury of the Gods as its certainly worth playing.