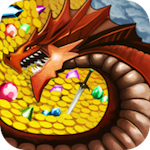 Heads up: Dungeon Plunder ($1.99) is awesome. It’s a rogue-like RPG with a slick slot machine combat mechanic that basically just visualizes all the dice-rolling going on behind the scenes in most RPGs anyway. The end result is that it’s way less “clicky" than most iOS titles, but just as cerebral. You’ll see what we mean.

In the game, you pick one of three different kinds of heroes and are tasked with saving a fantasy world from a fantasy villain in a fantasy land. What’s interesting is that the map and quests are randomized, so every play through ends up being pretty different — and you’ll be playing a lot because death comes easily.

We’re really digging this game; the look is great, the battle system works surprisingly well, and its RPG systems are compelling. Give it a look if you’re on the fence. Today, we managed to make it through the first area, which is a big deal to us at least.