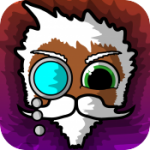 I’ve got to hand it to Butterscotch Shenanigans, there aren’t that many iOS games that can pique my interest on premise alone. However, TowelFight 2: The Monocle of Destiny (Free) certainly does, and is a pretty crazy title in most regards. More importantly, TowelFight is an enjoyable game, with only some control issues keeping back an otherwise unique take on the old-school action-adventure genre.

TowelFight follows the story of Hardik, an ordinary monocle-wearing guy that gets sucked into an alternate dimension where infighting amongst gods is causing chaos. Armed with his newly enchanted monocle, Hardik gains the ability to shoot animals from his eye and is charged with a quest to take down opposing gods and save the world. While the story sounds entirely absurd, I thought TowelFight did a great job not only with its overall narrative but also with its dialogue, which is often tongue-in-cheek and filled with a lot of amusing colloquialisms.

From a broad standpoint, TowelFight plays similarly to the original Legend of Zelda. Combat and exploration take place in single-screen environments connected by doors and tracked with a grid-like overworld map. Enemies also drop coins, which can be used to purchase a variety of weapons and items. Health is also measured in hearts, with Hardik losing a percentage of coins and returning to home base if he dies. 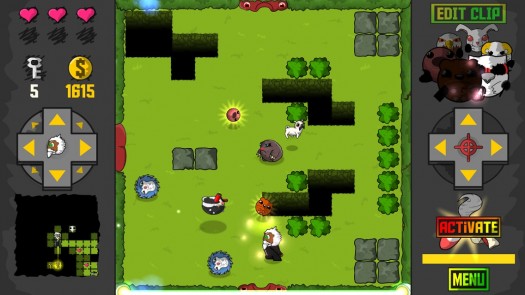 While there are plenty of supplemental screens to explore and enemies to take out, the main quest surrounds taking out various bosses, which require boss keys before you can access their screen. Thus, you’ll spend most of your time slowly working your way across the map to a boss key, then on to the corresponding boss, which in turn opens the next boss battle and the cycle repeats. 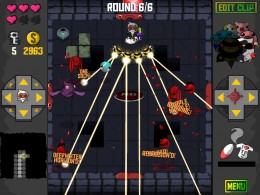 Any vague comparisons to Zelda ends with the above description, however. Explored screens remain enemy-less after they are defeated. A warp system allows Hardik to travel across the map with relative ease. In addition, the game’s ridiculous and hilarious story and theme are the polar opposites of what you might find in a ‘serious’ adventure. Of course, considering how much I enjoy TowelFight‘s narrative, I welcome the zaniness with open arms. This theme continues with the visuals, which are reminiscent of an old-school style but are supplemented with an intense amount of on-screen special effects. At times, the effects were a little too much, as it can be difficulty to track enemies and projectiles coming at Hardik.

And then there’re the weapons, which are the stars of TowelFight. Hardik can eventually pick up 40 different animal projectiles (or as the game calls them, ‘Jectiles) that can be used in his monocle. The different animals aren’t just for show either, as they cover a pretty wide variety of attack ranges, style, and effects. For example, the Mantis will surround you in a shield-like formation (attacking those that come into contact) while the whale is a very slow ‘Jectile that deals heavy damage to anything caught in its explosion. In addition, each animal has two augments that can be found (or bought) which expand on the weapon capabilities of that animal. 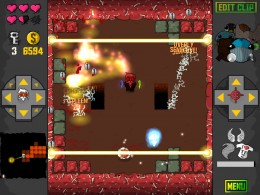 I absolutely love TowelFight‘s animal system and I think it goes a long way towards improving replaybility via collection and strategy. Completionists will want to spend time catching all the various animals while battle strategists will want to check each out in order to create the best monocle combinations to suit their playstyle. While most animals and augments can be bought or found on the overworld, I also appreciate the fact that the strongest (or at least, the most interesting) animals and their augments are hidden away in randomized dungeons that must be explored in order to find and use them. I didn’t even get to mention relics, which afford Hardik special powers that can be activated after charging a power bar.

There’s a lot to love with TowelFight, but one aspect that I really don’t like are its controls. Employing a dual-stick shooter control scheme, TowelFight‘s sticks are fixed and are center-aligned on both sides of the play area. The current location makes it very easy for your thumbs to lose their bearings on the neutral sports of the sticks, forcing you to divert valuable attention to realign. Considering how hectic TowelFight can get, this can lead to some rather frustrating experiences with Hardik unnecessarily losing hearts and even dying simply due to control issues.

A big update with new control options is in the works, so things are likely to improve in the future, but it’s a shame about TowelFight‘s controls in their current state because otherwise it’s an incredibly enjoyable game. With a decent amount of story content, tons of weapons and customization and a hilarious story to boot, folks looking for an action-adventure game that doesn’t take itself seriously really need to check out TowelFight. If you’re still on the fence, I highly suggest checking out our recent TA Plays on it.